Stainless steel, brass and polycarbonate are among the materials used by firms Dreamscript Lab and Un-group to create a small Chinese restaurant in New York with a futuristic atmosphere.

Located in the East Village neighbourhood, Dumpling Lab serves up contemporary dishes influenced by the coastal cuisine of Qingdao in northern China. Specifically, the restaurant focuses on dumplings with atypical fillings.

"The concept behind the restaurant is to re-create the Chinese dumpling by introducing non-traditional, new stuffing while engaging the guests to test out new recipes like in a lab," said local firm Dreamscript Lab, which has designed several Asian restaurants in Manhattan.

The practice designed Dumpling Lab in collaboration with Un-group, a studio based in Beijing and Shanghai.

The designers aimed to create an inviting environment that conveys the eatery's experimental spirit. For the "futuristic, lab-like interior", the team used materials not often found in dining areas, including polycarbonate and stainless steel.

Roughly rectangular in plan, the 1,650-square-foot (153-square-metre) eatery is spread across a main floor and basement level and seats up to 30 people.

Upon entering, diners encounter a bar and dining room awash in golden light.

Along one wall is a faux leather and fabric banquette, stainless steel tables and acrylic chairs. Along another wall is the bar, which is clad with textured grey tiles and lined with acrylic stools.

Behind the bar is a double-layer, polycarbonate backdrop that is illuminated from behind. The room also features brass lighting details and surfaces covered in porcelain tiles that resemble terrazzo. 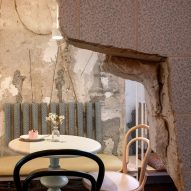 From the bar, guests proceed down a staircase bordered by a green wall with fake plants and step into a compact dining area.

Backlit polycarbonate panels cover the walls, while the ceiling is sheathed in stainless steel tiles that look like rippling water. A cool, blue hue fills the room.

"The overall space has an illusional but playful atmosphere," the team said.

Lighting plays a key role throughout the eatery, the team said, noting that there is no traditional direct lighting.

"Most of the light sources are recessed in the walls, hidden behind the polycarbonate panels, and concealed under the stair nosing and railing to highlight the architectural elements," the team said.

The photography is by Yuncheng Dong.