The London and Sussex-based practice was approached after interior designer Deborah Vos purchased the remote site overlooking Woolacombe Bay, which had restricted access but offered panoramic views of the rolling green landscape and sea.

The exposure of the site informed the low, single-storey profile of the four-bedroom dwelling. It is marked out in the landscape by its cladding of black timber planks, which were charred using the Japanese technique Shou Sugi Ban.

Following the contours of its sloping site, the home comprises three distinct levels that step downwards, creating a route that culminates in a large living area, terrace and garden looking out to sea.

"The exposed, yet stunning location, along with planning restrictions, influenced the form, which evolved into a single-storey building that nestled into the site's gradient," said the practice.

"The building makes sense of the contoured site with the creating of three flowing terraced levels, dropping down the hillside, reflecting the surrounding landscape."

The stepped form of the home has been used to subtly demarcate the different areas of the home. The bedrooms are located in the uppermost section, a kitchen and bar in the centre, and a living and dining space in the lower section.

The upper spaces are more insular, with skylights, small windows and darker finishes, while the living space embraces the exposure of the site through large, panoramic windows.

"Glass slots along the side bring glimpses of the coastal views to the very depth of the building, whilst naturally gravitating you towards the main living spaces on the bottom terrace that opens up to the rear garden and the uninterrupted sea views," explained the practice. 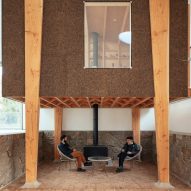 Internally, the dwelling was designed to appear "monolithic and sculptural", with concrete floors and cast concrete steps unifying the route through the home and extending outside to create the external terrace.

Completed by the client, the interior design uses a monochrome palette to create contrasting moments of intimacy and exposure. The home's cladding is referenced inside with black accents used for doors, window frames and fittings.

The primarily white living space is organised around a central ceiling-mounted fireplace, with a dining table along one edge and sitting areas at the other.

Overlooking this space is a bar area opposite the kitchen above, finished in black to visually connect it with the central kitchen island and built-in cupboards and counters.

Each of the darker bedroom spaces looks out at the landscape through a glass sliding door, which opens onto a gravel path around the home and is half-covered by charred timber slats to provide additional privacy.

Also in South Devon, architect Thomas Randall-Page recently completed a renovation of an agricultural barn, converting it into a studio and archive space for his father, the sculptor Peter Randall-Page.