Scottish practice Mary Arnold-Forster Architects has designed a cluster of small buildings around a wildflower garden in rural Scotland, that contain both an office for the studio and a home for its founder.

Located in the small hamlet of Fungarth, Dunkeld, the home and office sit alongside a former ploughman's cottage and steadings.

Rather than filling the site with a single building, the development was split into several buildings that loosely enclose a courtyard. They have been gradually completed since 2017 and include a greenhouse and wooden kayak store as well as the home and office.

"The site of the former ploughman's cottage was bought with an existing planning application for a square house sat in the centre of the plot," explained Mary Arnold-Forster Architects.

"The project was redesigned to create a south-facing 'walled garden', with the new larch house to the north, a corrugated office to the east, a lean-to greenhouse to the west and to the south a screen beyond which the steading can be seen."

The two-storey home and single-storey office buildings were designed with barn-like forms that reference the area's traditional structures.

"The buildings sit in their context and are traditional in scale, siting and massing, but detailed in a contemporary way," said the studio. 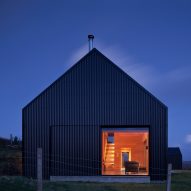 The dwelling, which was clad entirely in horizontal larch planks, has a ground-floor kitchen and sitting area that surround a wood-burning stove and opens onto the central garden through sliding glass doors.

A staircase with a thick, exposed concrete balustrade leads up to the first floor, where a skylit living room, study, bedroom and bathroom sit beneath a gabled ceiling.

The ground floor is finished in a terrazzo-style aggregate concrete from a local quarry, with waxed pine floorboards used on the first floor, complemented by birch plywood joinery.

The nextdoor office volume is clad entirely in corrugated fibre cement panels, and a gabled ceiling creates a high and bright studio space filled with desks.

Turning away from the larch-clad dwelling, the office looks out through windows in one corner to the south and towards the original farmhouse building.

The kayak store opposite the dwelling acts as a wooden screen that helps to minimise overlooking, while to the north the site boundary is defined by a simple metal mesh fence.

Both the landscape and architecture of rural Scotland has provided inspiration for Mary Arnold-Forster Architects' previous projects, including a black tin-clad house inspired by a traditional Blackhouse and a burnt larch-clad house in the Scottish Highlands.

The photography is by David Barbour.