Dogs aren't the only animals to get special treatment in this colourful canine training centre near Madrid, which also includes homes for birds and bats.

Educan is a building designed by two Spanish architects, Eeestudio founder Enrique Espinosa and Lys Villalba, with biodiversity in mind.

The building is referred to as "a school for dogs, humans and other species".

It primarily offers training for both dogs and dog trainers, but also accommodates various "companion species" that support the natural ecosystem of the local area.

Small birds and bats feed on insects such as mosquitoes, which can carry canine diseases, while also contributing to local pollination cycles. Meanwhile birds of prey help to keep rodent populations under control.

Villalba said the aim was to create a building that helps nature to thrive.

"Sitting amongst fields, in a rural environment transformed over recent decades by urban development and intensive pesticide-reliant agriculture, Educan is trialling ways to recover the conditions of the ecosystem," she said.

Organised over one storey, it is divided up into three spaces that include a training area that can be easily subdivided, a classroom and a reception area containing a kitchen and toilet facilities.

The building's design offers facilities for all of these different users.

The flooring is a concrete aggregate that incorporates river pebbles, to make it better suitable for dog paws, while rolls of synthetic turf can be laid down in the training rooms.

Pyramid foam insulation creates a layer of soundproofing against loud barks, while windows are positioned at heights that suit both dogs and trainers.

"The average eye height drops from over a metre and a half, to just half a metre," said Villalba.

"Interior openings are raised to heights of more than one metre to avoid doggy distractions, while louvred window shutters shade the south facade, leaving enough space below for dog traffic to the outside," she said.

High ceilings create plenty of perches for the building's bird residents, and each species also has its own dedicated nesting area.

Nests for bats are located in a more surprising location. 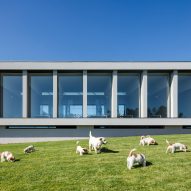 They are located within the six chunky letters that spell out Educan on the building's facade.

The building also integrates rainwater harvesting, providing water-filled troughs for the use of all animal species.

Educan is brought to life by a vibrant colour palette that includes shades of red, yellow, blue and mint green.

Bespoke details riff on these elements, for instance, the wiggle-edge plywood seating and the large circular windows.

"Educan is an experiment that demonstrates how agricultural architecture can also be a place of exploration and architectural innovation," added Villalba.

Other recent buildings designed with dogs in mind include the Canine and Feline Hotel in Portugal and the Ohio office of dog toy brand and treats brand Bark.

The photography is by Javier de Paz García and José Hevia, as indicated.