A brise-soleil made of orange-hued ceramic pieces is among the additions to an Asunción house that has been renovated by local firm OMCM Arquitectos.

The project, called Reforma Alas, is located in the Los Laureles neighbourhood in Asunción, the capital of Paraguay. Situated on a rectangular, 520-square-metre site, the house faces a recently paved street that has begun to draw more traffic.

OMCM Arquitectos – a local firm led by led by Matías Ortiz and María Paz Chamorro – was initially commissioned to do a quick renovation that entailed fixing bathrooms, installing a couple of walls and general painting.

Upon investigation, however, the team determined that the house was deteriorating due to leaks and moisture issues. Moreover, the home had narrow spaces that did not offer good lighting and natural ventilation.

"Through a deeper diagnosis in consensus with the owner of the house, we determined that it would be appropriate to take advantage of the occasion to rectify such inconveniences," said OMCM Arquitectos.

"This challenge also gave us the opportunity to provide the building a new identity, more adapted to the requirements of contemporary life and to the climatic context of our region."

Among the changes was the addition of ceramic screens on the front and rear facades. Beyond granting privacy, the screens help reduce solar heat gain – an important consideration in a subtropical climate.

The screens' ceramic pieces are arranged in a V-shaped formation, and gaps in the assembly enable wind to pass through to the home's interior.

According to the architects, wind speed increases as it passes through the screen – a phenomenon known as the Venturi effect, which was discovered by Italian physicist Giovanni Battista Venturi.

"Due to the difference in the inlet and outlet section of the flows, there is an increase of the wind speed and consequently a refreshing sensation, thus obtaining greater thermal comfort and energy savings," the team said. 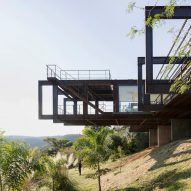 Within the home, the team made changes to the layout, particularly on the ground level, where walls were removed to create a larger and more fluid public zone.

Upstairs, bathrooms were reconfigured and added, and a front-facing terrace was significantly enlarged. Topping the terrace is a pergola made of salvaged wood.

Beyond the main dwelling, the team rehabilitated a building in the back of the site that holds a barbecue area and service quarters. A channel slab was incorporated to extend and organise the building and make it more functional.

Overall, the home's renovation resulted in spaces that are brighter, larger and better suited for the congregation of family and friends. The revamp also enables the home to better adapt to its evolving context.

"The result is a completely rethought house that is incorporated into the urban fabric in a more coherent and lasting way," the team said.

Other homes in Paraguay include a rural house by Bauen that cantilevers of over a steep and lush landscape, and a dwelling by Javier Corvalán that can be lifted open like the lid of a box.

The photography is by Leo Mendez.