Originally built as a metal foundry in 1902, the 12,700-square-foot (1,180-square-metre) structure had been partitioned several times over the years, creating cramped rooms with little natural light.

The first decision that CO Adaptive Architecture made was to open the interiors to form an expansive, top-lit space.

"Across the interior, previously subdivided spaces were opened up and existing windows, skylights, and clerestories were replaced or restored, permitting sunlight to penetrate all corners of the large square footprint," said CO Adaptive Architecture.

In addition to removing excess walls from the interiors, the architects also cut out the floor in half of the building, creating a tall, lofty space for rehearsals. This expansive room can be subdivided with full-height, folding doors that tuck away when not in use.

Visitors enter the building from a side alley, into a lobby where stepped, auditorium-style seating offers glimpses of the rehearsal space in the building's cellar from the entrance.

On the ground floor, there are additional, smaller rehearsal spaces available, as well as administrative offices.

CO Adaptive Architecture housed the new program elements in smaller volumes built from cross-laminated timber (CLT), a type of composite wood made up of smaller pieces glued into wall panels, beams, or columns.

"This is the first project in New York City to use mass timber to transform an adaptive-reuse building, and we hope it will lead by example; using mass timber to reduce our embodied carbon and reinvigorate our aging building stock," said CO Adaptive Architecture principal Ruth Mandl. 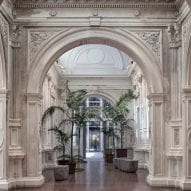 The insertions into the building contrast the historic shell, which the architects sought to preserve and highlight as much as possible.

Throughout the space, the building's original brick walls and heavy timber trusses were left unfinished.

As part of the conversion, CO Adaptive Architecture needed to re-insulate the building, which they did from the outside.

"Insulating the building from the exterior allowed us to expose the existing materials' warmth, texture, and history of use," said Mandl.

"We even left intact the construction spray paint annotations on the exposed brick walls," the architect added.

A new facade of aluminium panels wraps the building, honouring the industrial surroundings of the neighbourhood.

CO Adaptive Architecture is led by Mandl and Bobby Johnston, and is also located in the Gowanus neighbourhood – an area that has recently undergone intense redevelopment, as part of a scheme to re-zone the land for uses other than industrial facilities.

Last year, New York City updated its building codes to allow for mass-timber buildings of up to six storeys. Projects that use CLT elsewhere include a tower in Sweden that the architects claim is "carbon-negative" and a new entrance pavilion for Cambridge College designed by London-based architect Allison Brooks.

The photography is by Naho Kubota.