A brioche-bun version of Mario Bellini's 1970s Camaleonda sofa designed by Canadian artist Gab Bois has gone viral online after being shared by rapper Tommy Cash, who claimed he was in talks with IKEA about putting the high-carb couch into production.

In a post on Cash's Instagram, the seminal piece of Italian Radical design is rendered from more than 40 glistening hamburger and hot dog buns, complete with a bootleg IKEA tag reading: "Do not iron. Do not dry clean. Do not eat."

"IKEA told me if we get 10,000 comments under this post they will release the Loafa," Cash wrote in a caption that has since been removed and replaced with the promise "coming to your nearest IKEA söön".

Although the project was widely reported on as a real collaboration, the Swedish furniture brand has since denied any involvement.

"No one from IKEA was in touch with Tommy Cash," the company's global press officer Diana Lavrenova told Dezeen. "We don't see the project as feasible."

Lavrenova compared the concept to a.i.r. – the experimental blow-up sofa IKEA released in the 80s, which is known as "one of the biggest mistakes" in the company's history.

"We tried air sofas once, which turned out to be a great mistake," she said. "Bun sofas seem to fit in that same airy category."

Cash photoshopped himself onto the sofa

Gab Bois originally posted the "Camaleon-dough" sofa earlier this month, after rising to fame on Instagram for her gastronomical reimaginings of everyday items, from banana flip flops to weed pipes made from squash.

Her post makes no mention of IKEA and instead nods to Esther Choi's surrealist cookbook Le Corbuffet, which features a different bread-roll sofa modelled on a seating design by Knoll heiress Florence Knoll.

"I always like to play little tricks and illusions in my images, so I'm happy this one translated this well," Bois told Dezeen.

"I used brioche hamburger buns for the main cushions and brioche hot dog buns for the edges. Toothpicks that were hidden between each bun kept everything in place. It ended up being a literal representation of comfort food." 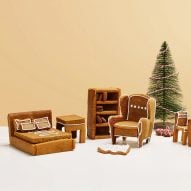 Cash, who has a track record of creating controversial designs such as his metre-long Adidas trainers, later shared a photoshopped image of himself sitting on Bois' bready Camaleonda sofa, creating the impression of it being a full-scale furniture piece.

He also added a close-up image of a mock IKEA tag wedged between two loaves of bread.

Since Cash shared the post on Sunday, it has amassed more than 12,000 comments in the hopes that IKEA will put the piece into production.

Although the brand has denied involvement in the Loafa sofa concept, IKEA has previously released a flat-pack Gingerbread Höme furniture kit with instructions for how to assemble the Billy bookcase and some of its other seminal furniture designs using gingerbread.

The photographs are courtesy of Tommy Cash and Gab Bois via Instagram.