On show until 12 February, Accidents Will Happen exhibits works from the Creative Salvage movement – an informal design movement that originated in London in the 1980s.

Creative Salvage took off as an anti-establishment design practice against a backdrop of social upheaval and political dissent – exemplified by the 1981 Brixton riots and the miners' strikes that took place across the UK in 1984 to 1985. 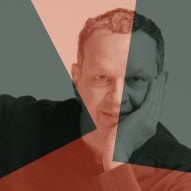 "As long as you have attitude, you don't have to be talented" says Tom Dixon in Dezeen's latest podcast

"There was a certain punk rock atmosphere, in the sense that they almost unwittingly made you realise that anybody can be a good designer," Friedman Benda guest curator Williams told Dezeen.

"All you need is the imagination and the most rudimentary materials and you can make design," he said. "Anyone could be a designer and anything could be designed."

Williams based the exhibition on a book he co-wrote ten years ago on the movement called "Cut and Shut: The History of Creative Salvage".

He believes that the influential period is often disregarded and overshadowed by the designers' later work. With Accidents Will Happen, he aims to reinsert the movement into the history of design.

"It was about looking at the best pieces by the key designers that formed that kind of core early work," Williams explained.

"That earlier work, which should be an exciting dynamic, has often been overlooked. So this was what I thought was a chance to kind of redress that."

Below, Williams shares why these five designs are his highlights of the exhibition:

"Ron started off earlier than everybody else in 1981. And at that time, he was well known for his Rover chairs which incorporated old car seats. He was doing so well after the early stuff that it became a little bit creatively unexciting for him – he wanted to be more adventurous.

"André joined the group and added a certain French sophistication to the kind of rawness that these guys were doing. He was much more business-minded and he was eager to refine things. When he started off, he created three fully formed design classics almost immediately – some of which are in the show. It was just incredible. He came from nothing and then suddenly he was making these design icons.

"His primary material early on was interesting. He used rebar, which is the metal reinforcement rods they put inside concrete to reinforce it. He basically shaped, bent and welded it into these elegant chair shapes.

"The reason I've included this chair is because it's a unique chair. This was a one-off and not many of these kinds of early pieces are around anymore, so it's important."

"Deborah had a slightly different background. She studied theatre design and her pieces are all lighting. I love her lighting and really wanted to do them justice by showcasing them to a much wider audience.

"As they're so labour-intensive to produce, Deborah isn't that prolific and you'd have to visit either the V&A or the Ashmolean Museum to see them in person.

"They have this incredible balance, of being beautiful without losing their rawness, or 'punk-inspired anarchy' as Deborah herself describes it. The fragments of bottle she uses are carefully broken into smaller pieces using a small metal hammer before being suspended from wire. It's amazing that this level of control and patience results in such riotous organic forms."

"To me, that [the table] sums up what Creative Salvage was about. These designers broke all the rules. Partly, I think because they didn't know what the rules were. None of them were trained: none of them had been to design school. They were almost accidental furniture designers in many ways.

"The table looks like it could come out of the demolition derby. It's made of recycled materials. The granite tops were rescued from a skip: Mark was walking past a bank that was being renovated in Notting Hill in the 1980s and that was the facade of the building. He thought: 'I could make something out of that'. That's how this piece came about.

"I think that exemplifies the creative side of the movement and seeing opportunity in found objects."

"This marks a transition for Tom from the realisation that he was becoming a furniture designer by profession. They [the designers] started off doing it for fun, not taking it too seriously, enjoying what they're doing and then it morphed into this career.

"This is the Pylon Mirror. It's unique. It was a special commission for fashion shoots and it coincides with when Tom's stuff was also starting to be made in Italy. At this particular time Italians started taking notice, and they were in London looking for designers to represent.

"Capellini put some of Tom's pieces into serial production, including the Pylon Chair which is among Tom's most iconic pieces.

"So you almost have this two-tier thing where the serial production from furniture manufacturers and the pieces that Tom was making in the studio crossed over for a while. He never stopped making pieces hands-on in the studio, even though the big furniture makers were starting to take on this design."

Photographs are by Daniel Kukla, courtesy of Friedman Benda.

Accidents Will Happen: Creative Salvage 1981-1991 is on show at the Friedman Benda in New York until 12 February 2022. See Dezeen Events Guide for an up-to-date list of architecture and design events taking place around the world.