Designer Tom Dixon describes how a motorcycle crash forced him to abandon a career as a bass guitarist in the latest episode of Dezeen's Face to Face podcast.

For this episode, Fairs sat down with British designer Tom Dixon at his combined office, showroom, shop and restaurant at The Coal Office, a Victorian structure that previously hosted a nightclub in London's Kings Cross.

One of the few British designers to become a household name, Dixon produces furniture, lighting and accessories under his own brand name. He describes the Tom Dixon brand ethos as "expressive minimalism". This involves "trying to reduce the object as much as possible whilst maintaining its character".

Yet he left school with only one qualification in pottery and worked in the music business and in nightclubs before turning his hand to producing hand-made metal furniture.

Born in Tunisia, Dixon spent his early childhood in Morocco before moving to London with his family at the age of six. While he admits to not having been a good student, it was at school that Dixon discovered his creative streak.

"I managed to fill my time, not with the stuff I should have been learning but tinkering around in the ceramics and life drawing departments and that's where I first encountered the joy of creation," he said in the interview.

When a first motorcycle accident put an end to a brief stint at Chelsea School of Art, he delved into the world of music, playing bass in disco-punk band Funkapolitan.

Opening for the Clash in New York

"The people that went to see the Clash were punks and we were disco," Dixon said, recalling a gig in New York where the audience threw bottles and spat at the band. "That was a pretty scary experience. It was quite nasty but character-forming, you know. I was always a shy boy."

While he wasn't a fan at the time, the DIY ethos of the punk scene influenced the way he approached the beginning of his career.

After a second motorcycle crash ended his music career, Dixon started producing welded furniture made from scrap metal, which he sold to people he'd met on the London nightclub scene.

"I get bored so easily, so there was something about the speed of action in metal that really appealed to me," he explained. "Peering through the goggles at the fire and seeing the molten metal fuse together and then suddenly having a structure that you could sit on."

Dixon started to gain prominence as part of the ad-hoc Creative Salvage movement, alongside Ron Arad, Mark Brazier-Jones and other London designers who produced hand-made objects from found materials. 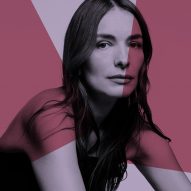 The iconic S-Chair, featuring a sinuous steel frame with straw upholstery, was designed around this time and later became the first Tom Dixon piece to be added to the catalogue of Italian furniture brand Cappellini.

Dixon later worked as creative director at retailer Habitat before setting up his eponymous brand.

"I had 10 years of life in a corporation," he explained. "I'll always be grateful because I learned so much but I was hungry to design again rather than telling other people how to design."

"I'd managed to meet some of the great designers of that time, including [Achille] Castiglioni and Verner Panton, and managed to commission lots of people like the Bouroullecs and other younger designers," he added. You know, I was a bit jealous of them, so it was time to start again."

Dixon now employs around 140 people at his London headquarters and sells around 1,000 different products, including fragrances and textiles, in 75 countries. Last year he opened The Manzoni, a second combined restaurant and showroom in Milan and recent ventures include a collaboration with Swedish synthesizer outfit Teenage Engineering.

"I don't want to be like in the music business where you have to play your greatest hits again and again," he said, before heading off for a jam session with a Danish techno musician.

Produced by Dezeen's in-house creative team Dezeen Studio, Face to Face episodes will be released every Tuesday. Past episodes have features Es Devlin, Thomas Heatherwick and David Chipperfield and future interviewees will include John Pawson.

The previous episode of Face to Face featured Serbian fashion designer Roksanda Ilinčić who described how she learned about dressmaking by slicing up her mother's designer outfits.