A snaking bridge that incorporates spaces for play, rest and planting connects two areas of wetland across Shanghai's Yuandang Lake, in this project by Brearley Architects + Urbanists.

The China and Australia-based Brearley Architects + Urbanists (BAU) designed the 586-metre beam bridge for cyclists and pedestrians as a "hybrid structure", blending architecture, infrastructure and landscape with the existing pathways and nature on the site.

Running east-west across the southern end of Yuandang Lake, the bridge has provided a new connection between Shanghai municipality and Jiangsu province since it opened in 2020.

"The serpentine plan of both the park's networks is adopted for the bridge, making it a smooth and formal extension," BAU director James Brearley told Dezeen. "It also provides the benefit of varying progressive views, a Chinese classical garden principle."

"The bridge is a hybrid of several elements not usually seen in a bridge, combining vegetation, pavilions, sculptural play spaces and plazas with seating," he continued.

"The client did not plan on the vegetation or pavilion on the bridge, but embraced these initiatives."

Y-shaped steel columns support the bridge's steel box girder structure, topped by a snaking walkway that widens in three places to create space for a covered pavilion and rest areas looking out across the lake.

The bridge is divided into three strips demarcated by graphics. Pedestrian and bicycle lanes run either side of a central area featuring trees, plants and elongated seating areas that follow the bend of the bridge. 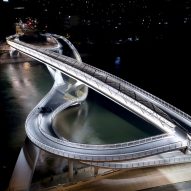 At the Yuandang Bridge's midpoint, a large canopy of hammered metal supported by thin steel columns covers a pavilion space. Here, seating and a "pavilion playground" are incorporated by a sculptural tunnel of white perforated metal sheets.

"Maximum perforation giving transparency is achieved where the load is lowest and minimal perforation where the surface requires strength," he added.

Strips of lighting on the base of the bridge's walkway create a glowing effect on the lake at night, complemented by lights at the base of seating areas, along the balustrades. Uplighting also creates shadows and reflections in the pavilion playground.

The photography is by Zhu Runzi.