Swedish architect couple Andreas Lyckefors and Josefine Wikholm have designed and built themselves a home with a decorative lattice facade, plus a matching property next door.

Lyckefors, who is co-founder of architecture firm Bornstein Lyckefors, and Wikholm, who works for Semrén & Månsson, designed Villa Timmerman and its neighbour for a site in the south of Gothenburg, near the sea.

Developing the site into two properties rather than one was key to making the project stack up financially.

Instead of creating a bespoke design for themselves, the couple decided to make both homes identical. The only difference is in the orientation – the floor plans are a mirror image of each other.

"We tried different layouts but came up with a scheme that worked really well in both directions," Lyckefors told Dezeen.

By making the homes semi-detached, the architects were able to create a more cost- and space-efficient scheme.

While planning authorities would only permit a certain amount of development on the site, the couple were able to create five bedrooms in both homes.

"The site is pretty much developed to a maximum," said Lyckefors. "There was no room for us to create separate structures and still keep the size of the homes."

The most distinctive feature of the building that holds the two homes is the patterned facade, made up of timber beams running in three different directions. Some run vertical, while others follow the angle of the sloping roof.

The idea was to give the building more character than it would have with just vertical cladding. But the arrangement has proven to have other benefits.

"It works well as extra protection against solar radiation on the facade and as a protective layer against the drifting rain on the west coast," said Lyckefors.

"Also, the layering of snow adds a seasonal touch to the house during winter."

Wood was used for the entire building structure. As well as the lattice cladding, the houses have a timber frame that was prefabricated in a factory and assembled on site.

The exterior is coated in a wood tar that combines black and brown pigments, helping to protect the structure.

Exposed wood is a common feature throughout the interiors, thanks to the addition of ash veneer and solid ash boards.

The staircases are a highlight, incorporating extra-large steps that can be used as seating or a display area. 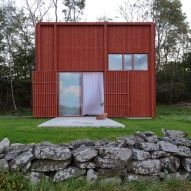 "We wanted a light wood Scandinavian feel to the house," said Lyckefors.

"Using the wood vertically in the staircase, the warm embrace of light on wood is cutting through the entire house."

The layout is designed to provide flexibility for a range of situations.

Living spaces are open but located on all three floors, so they feel connected but can allow various activities to take place simultaneously.

There are also bedrooms on all three levels, so they can easily be used for other purposes.

"We wanted the house to be able to grow with the family and function well during all stages of life," said Lyckefors.

This is the second project that Lyckefors and Wikholm have developed themselves, having previously built a summerhouse on the island of Kallaxön.

With this project, the couple struggled to decide which house to keep for themselves, having put the same degree of care into both properties.

"It was incredibly hard to pick sides," added Lyckefors. "We couldn't make up our mind until the last day before meeting the real estate agency."

Photography is by Kalle Sanner.