The dwellings are located in the village of Qinglongwu in Tonglu County, in an area currently being transformed into a cultural and tourist destination known as the Fangyukongxiangsu Cultural and Creative Complex.

"Here we can have a closer connection to nature, to be able to relax and unwind, free from the distractions of modern life."

"The buildings have this great sense of aging, the old walls and windows tell the stories of the past through the marks and imperfections on their surface," he continued.

The studio aimed to retain as many of the original materials and finishes of the village's structures as possible, setting any new additions apart into order to allow guests to clearly see the difference between the two.

The original timber roofs proved too weak and damaged to be restored, and were instead replaced by steel structures that raise each roof slightly, creating a distinctive strip of clerestory glazing beneath the eaves.

"The new roof was lifted off the existing walls to create a more generous ceiling height," explained the studio.

"Diffused light softly penetrates into the depths of the space, and guests can see the bamboo forest from any angle in the roof, providing a constant connection to the landscape," it continued.

To bring more light into the previously gloomy interiors, new windows informed by the existing square openings were added. These have thin metal frames to differentiate them from the original wood-framed windows.

Internally, the original walls, doors and window shutters have all been kept and repaired, with the rough finish of the rammed-earth walls contrasted by new partition screens and furniture. 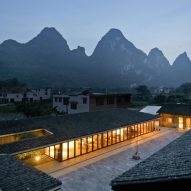 The cobbled streets that connect each building have been reimagined as social spaces for guests, creating "moments for people to come together".

The new two-storey buildings sit at the base of a mountain path, and are built out of rough concrete to contrast the rammed earth of the traditional structures.

Large windows in the walls and ceilings of seating areas frame views of the nearby forest, as well as turning the structures into a "beacon" that is visible to visitors.

"The architectural form is regarded as the rock exposed from the hillside by the baptism of water and wind," said the practice.

"We regard the new building as a beacon that guides travellers. No matter what direction people approach it from, it welcomes them to enter it."

Another accommodation option in the Qinglongwu area was recently designed by Atelier Tao+C, which converted a rammed-earth structure into a capsule hotel and library with a projecting glazed extension.

The photography is by Zhi Xia unless stated.