Meta Architectuurbureau and Van Bergen Kolpa Architecten have designed Agrotopia, a greenhouse in Belgium that was added to the roof of an agricultural market to create an urban food production centre.

Located in the city of Roeselare, Agrotopia is Europe's largest public building for urban food production and will be used to both farm food and educate the public about agriculture.

The 9,500-square-metre greenhouse was built on top of the REO Veiling agricultural auction market. It was commissioned by REO Veiling together with Flemish farming and horticulture research institute Inagro.

Inside, Agrotopia is divided into four climate zones to allow it to grow a number of different fruits and vegetables, and the building also has research facilities and an educational trail for the general public.

The architects created box-in-box spaces within the warm and humid greenhouse so that the areas dedicated to research and education would have a more suitable climate for the people working in the building.

From the outside, Agrotopia appears as one cohesive greenhouse that Meta Architectuurbureau describes as "a proud, transparent sculpture of steel and glass".

The entrance side of the building has a facade that is vertically faceted to form bay windows with a wide staircase running along the length of the building.

This leads up to the Urban Horticulture Square, which forms the starting point for visitors to the centre.

The greenhouse also features a double-height conservatory that was designed to support vertical cultivation. This section has a horizontal faceted construction that the studio says guarantees good sunlight for the crops while also creating a reflection-free view at ground level.

At the foot of this conservatory are silos storing rainwater from the roof, which is used to irrigate the greenhouse.

Run-off from irrigation is also recycled and reused within the greenhouse, while heating comes from residual heat from a nearby waste incinerator, creating what the architects call a "circular symbiosis with the city". 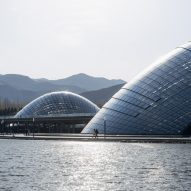 "Together with the clients, Inagro and REO Veiling, we have realised an ambitious building with numerous innovations," said Van Bergen Kolpa Architects director Jago van Bergen.

"A single building featuring different climate zones, sustainable and economical use of space, research into leafy vegetables and fruit vegetables in the city, opening up the rooftop to a public function, circular use of space and energy, to name but a few."

"Building a greenhouse atop an existing building has never been done before on this scale and it presented many opportunities and challenges," said Deboutte.

"The integration of the steel greenhouse with the concrete substructure and complex installations has resulted in a true public building with exceptional architectural quality for the city of Roeselare."

Agrotopia is part of the Flemish Government Architect's Pilot Projects for a Productive Landscape (PPPL), a programme that funds innovative building projects that meet social challenges.

Van Bergan Kolpa is a Dutch studio that specialises in architecture for food, while Meta Architectuurbureau is a Belgian studio whose past work has included the Bruges Meeting and Convention Centre, with Eduardo Souto de Moura.

The photography is by Filip Dujardin.