Shanghai-based studio Team BLDG has completed a series of visitor facilities for a sports park in Pazhou, Guangdong province, with spaces carved out of an artificial concrete-walled mound.

In contrast to the dense urban developments that overlook the site, Team BLDG wanted the centre to foster a closer relationship with the landscape and water, which informed the creation of an artificial mound concealing the new spaces.

"Starting with the existing landscape movement line, our design intends to meet two types of crowd activity: around and through the architecture," explained the studio.

"Therefore, we 'piled up' a naturally raised green space on top of the original landscape, then 'cut' through it with paths shaped like a cross."

"With the earth-covered construction, the architecture blends itself into the nature and becomes part of the original landscape of the sports park in a simple manner," it continued.

Spaces are organised around the deep, diagonal cut through the mound, which creates a courtyard and small garden area at its centre that is accessed by steps and a ramp.

These paved pathways act as an extension of the existing waterfront routes, leading to a park to the east and sports courts to the west.

Toilet blocks wrap the north, east and west edges of this courtyard, while a larger block to the south houses the reception room, viewing platform and staff areas.

The concrete walls of these spaces extend upwards to create sheltered spaces atop their green roofs, which provide a continuation of the surrounding parkland. 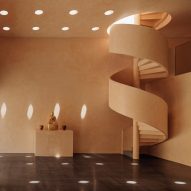 "The built-in functions of reception, rest, changing rooms and toilets respond to the needs of users from a more daily perspective," said the practice.

The interior of this courtyard has been clad with white terrazzo slabs to contrast the green landscape, emphasising its "cut-out" nature.

Internally, exposed concrete and brushed stainless steel have been used to create quiet and "sedate" spaces, emphasising the feeling of being in the earth.

"When people walk in from the noisy and hot outdoors, it creates a visual cooling effect," said the practice.

At night, the hidden nature of the new spaces is reversed, with illumination from within the centre highlighting the artificial hill's cut-outs.

Other recent projects by Team BLDG include the conversion of a factory bathhouse into a skylit gallery and art studio in Xiamen.