A historic theatre building and the remnants of a 1920s garage are incorporated into a cluster of contemporary glass and metal blocks at this new performance and arts venue in Hobart, Tasmania.

Named The Hedberg after the Hedberg Brothers Garage building that stands on the site, the new centre extends the 180-year-old Theatre Royal with venues, workshop spaces and a new home for the University of Tasmania's Conservatorium of Music.

Local practice Liminal Architecture and Singapore-based WOHA were awarded the project in 2013, with a design that sought to respond to the site's heritage while also creating a contemporary landmark for the city.

As well as directly connecting to the Theatre Royal with a new glazed and fully accessible foyer, the centre incorporates the frontage and walls of the original Hedberg Brothers Garage, which now houses administrative offices.

Externally the new forms contrast these historic structures, clad with a faceted pattern of metal panels that was informed by the act of opening theatrical curtains.

"The fabric of the building externally provides interpretative layers of the past re-presented through a contemporary lens, highlighting the story-telling potential of the building," said Liminal Architecture co-founder Peta Heffernan.

"We wanted The Hedgerg to feel more like a cluster of buildings on the city block, than a huge performing arts building that overwhelms the modest-scale heritage structures," added WOHA co-founder Richard Hassell. 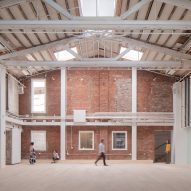 A glass box extends out over the street at the centre's southern corner, creating a triple-height atrium that welcomes visitors, weaving between the existing auditorium of the Theatre Royal and a new 350-seat recital hall.

On the other side of a central planted courtyard sit the studio and back-of-house spaces, with a staircase leading up to rehearsal rooms and studios for Conservatorium of Music students.

Internally, the walls of the original garage are set against concrete, wood and steel finishes. A rehearsal room finished in textured wooden walls informed by minimalist music notation.

The cluster-like arrangement of the buildings blocks has enabled roof terraces to be created at different levels, providing dramatic views across the city.

"As part of the heritage strategy, we used materials that are modern but harmonise with the stucco, sandstone and brick of the historical buildings," said Hassell.

Other recent projects incorporating historic structures into new theatres include the renovation of an industrial building in New York into rehearsal spaces, and the transformation of a historic malt house in Canterbury into the Malt House Theatre.

The photography is by Natasha Mulhall.