Royal College of Art fashion student Yuhan Bai has unveiled the Soil Project, a clothing collection made with a soil-based leather alternative and vintage garments dyed with soil, at Dutch Design Week.

Bai came up with the idea for the concept collection, which is comprised of a soil-leather corset and several soil-dyed items, after researching the negative impact the fashion industry and its reliance on cotton, in particular, has on soil.

"The increased demand for cotton in recent years due to rapid fashion development has resulted in the overexploitation of land and environmental problems such as soil damage," Bai told Dezeen.

"Soil is rich in organic matter and is one of the world's most valuable and important sources of energy, it nurtures all crops and there is great value in soil to be explored."

To make the animal-hide substitute, Bai mixed gelatin, agar, starch, glycerin and gluten with water and combined the mixture with different proportions of soil. It was then boiled before the liquid was cast in a mould.

According to Bai, the resulting transparent biomaterial is engineered to look and feel soft like animal leather, although it's designed to be as flexible as silicone.

"The method of making this kind of material similar to cook food; many of its formulas and composition are derived from food and the nature of the goods," Bai explained.

"I tried different raw materials such as gelatin, agar, starch, glycerin, gluten, mixed with water and combined them with different proportions of soil before boiling into the container or in the model," she added.

"The texture is like animal leather, it's soft and a little bit transparent. It's also like silicone, it's flexible."

Once set, the soil leather was laser-cut to create a corset top, while other pieces of the material were sewn into clothing items that Bai sourced from a vintage clothing market. Elsewhere the designer used the soil to dye fabrics, giving them a brown hue.

She conducted a range of experiments to test the different types of soil and find out which clothing material reacted best to the dye. 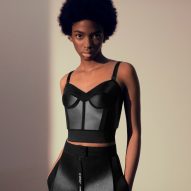 "During my experiments, I discovered that soil is rich in minerals and that natural minerals have been used in ancient times as natural pigments and for mineral dyeing," she continued.

"From the experiment, it was concluded that cotton, linen, silk and other natural fabrics are easier to colour, and weakly acidic loess, arenosols and dark brown soil have the best colouring, which also became the dyeing agent for my fabrics."

Bai began working with soil two years ago when she travelled back to her native China, where she began collecting damaged soil from various locations across the country.

"I collected soil from coal mines, oil, agriculture and chemical pollution – a portion of these come from abandoned industrial areas, some from farms and woodlands and some from natural forest soils," she said.

Fashion designers are increasingly experimenting with plant-based leather alternatives as consumers turn their backs on conventional animal hide leather and the unsustainable manufacturing processes employed to bring it to market.

Images are courtesy of Yuhan Bai.

Dutch Design Week 2022 took place from 22 to 30 October in Eindhoven. See Dezeen Events Guide for information about the many other exhibitions, installations and talks taking place throughout the week.