Construction has begun on the Senegal headquarters of the non-profit Goethe-Institut designed by Burkina Faso studio Kéré Architecture.

Set to be built alongside former Senegal president Leopold Sedar Senghor's home in Dakar, which is now a museum, the two-storey building will be built from compressed earth bricks.

When complete, it will be the Senegal office of non-profit German cultural association Goethe-Institut, with spaces to host exhibitions and teach language courses.

"Visitors and employees alike are to be provided with a space that speaks to and is home to the layered and storied cultural tapestry of Senegal's capital," said the studio.

"One that is welcoming and versatile in speaking to the vast and complex history of cultural encounters and asking a diverse community to gather to define an inclusive and sustainable future." 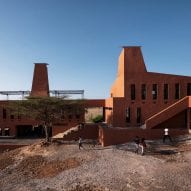 The 1,800-square-metre building is designed to match the scale of the surrounding, largely residential, buildings.

Its L-shaped form was created to avoid existing trees on the site and create a central courtyard-like space. A kitchen and bar will also be built alongside this courtyard.

Public functions, including an auditorium, cafe and library, will be located on the ground floor of the main building and connected to the institute's offices and classrooms on the level above by a pair of spiral staircases.

It will be built from locally sourced bricks with lattices, created to allow air into the building, and topped with a roof garden covered by a steel canopy.

Kéré Architecture was founded by Kéré in Berlin in 2005. The studio recently completed an education campus in Kenya and a university in Burkina Faso. In 2017 Kéré designed the Serpentine Pavilion in London.

The renders are courtesy of Kéré Architecture.