Architect Ibrahim M Jaidah has designed a building in the shape of the year 2022 in Doha, Qatar, to coincide with the county hosting the FIFA World Cup.

Built at Doha Sports City opposite the Khalifa International Stadium, which will host games during this year's World Cup, the Iconic 2022 building is described by its developer as being "the first building in the world to resemble a year".

Iconic 2022 was created for developer Nasser bin Hamad Al Thani by Jaidah, who is the chief architect of Arab Engineering Bureau and was also responsible for the gahfiya cap-shaped Al Thumama Stadium in Doha.

"The project is unique because it started with a simple idea," said Jaidah. "Sheikh Nasser said to me: 'Ibrahim, I have a challenging idea for you', and showed me a 2022 sketch."

The building is formed from four blocks, each with a stone facade arranged around windows to appear like a number two or zero. The number-adorned blocks are connected by a two-storey podium.

A supermarket, cafe and restaurants are located on the ground floor of the podium, while a sports centre and health clubs sit on the level above. Offices for several sporting bodies occupy the towers.

Along with the front facade depicting the number 2022, Jaidan was keen for the year to be seen in aerial shots, which has been achieved by combining paving and mesh-covered areas on the roofs of the four blocks. 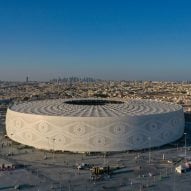 "We started with how to transform the project from just an idea to a complete design and how it serves the purpose behind its creation," he said.

"On the day I started working on the architectural design I noticed that many photos of stadiums are taken from above, so I wanted to design even the roof in the shape of 2022."

Al Thani hopes that, alongside the stadiums, the building will be a monument to mark Qatar hosting the World Cup.

"We had a design option inspired by the World Cup trophy," he explained. "But, the trophy does not belong to Qatar – the year 2022 belongs to us."

"We wanted to create a building related to the year and the generation that made the tournament happen," he continued. "I want the building to stand as a beautiful memory." 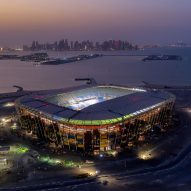 Set to take place this November and December, the 2022 FIFA World Cup will be hosted in eight stadiums across the country.

Alongside the Khalifa International Stadium and Al Thumama Stadium, completed venues include the Zaha Hadid Architects-designed Al Wakrah Stadium, a demountable stadium built with shipping containers and a stadium in giant tent.