Architecture firm De Matos Ryan has modernised a traditional pub in the English village of Nun Monkton, adding a collection of guest suites that take their design cues from agricultural buildings.

London-based De Matos Ryan was tasked with renovating and extending the heritage-listed pub in North Yorkshire, which is the last remaining hostelry in a village that was once an important trade hub for the medieval river transport network.

Named after a 19th-century racehorse, The Alice Hawthorn is an important meeting point for the villagers, but had been neglected and even closed for a period before being taken on by new owners in 2013.

The new landlords recognised that saving the pub from extinction required a more modern strategy focused on increasing its appeal to a broader audience. In 2017, they commissioned De Matos Ryan to oversee upgrades to the existing building and the development of several new accommodation blocks.

"The brief was to provide tourists, as well as the local community, with a high-quality but affordable basecamp from which to enjoy the surrounding landscape and visitor attractions," explained De Matos Ryan director Angus Morrogh-Ryan.

The project provides 12 ensuite guest bedrooms, including four on the first floor of the existing pub and eight arranged around a new courtyard that extends the village green into the pub's rear garden.

Drawing inspiration from the Norse word "garth", meaning an enclosed garden, the communal green is surrounded by buildings that evoke the region's agricultural architecture.

"The design reflects the character of the various informal farmsteads that surround the green, which continues to be grazed by cows and other animals," the architects pointed out.

"The home-grown Douglas fir framed buildings use authentic agricultural building materials, such as galvanised corrugated steel roofing and larch cladding, to create the sense that the animals have only recently moved out."

The new amenities include a single-storey staff accommodation block that is slotted between two existing brick buildings near the site's entrance. The structure is clad with larch and features a pan-tile roof to match the surrounding outbuildings. 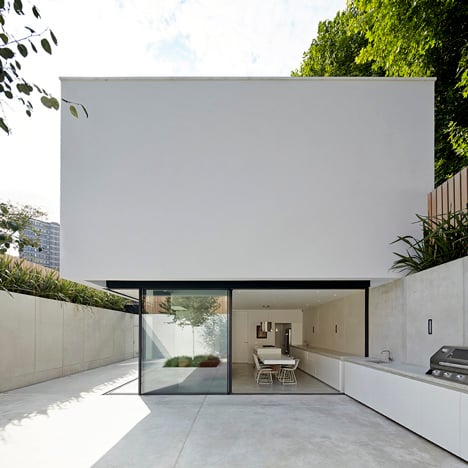 A two-storey building called The Field Barn is located at the southern end of the garden and contains two en-suite guest bedrooms on each floor.

The single-level Tack Room accommodates a wheelchair accessible guest room, along with space for an outdoor kitchen, pizza oven and bar on the western edge of the garden.

The Stables is a single-storey extension to the existing row of buildings on the eastern side of the site. It contains three guest bedrooms separated from the green space by brick pavers that form a driveway leading to the car park.

The Field Barn, Tack Room and The Stables all feature larch cladding and sinusoidal galvanised-steel roofs. The metal wraps around the whole of the Field Barn's upper floor, which is windowless to prevent overlooking and light pollution to the neighbours.

The interiors of the new spaces feature a contemporary material palette that intentionally contrasts with the more traditional pub areas.

Internal walls are lined with larch boards and poplar plywood that complements the exposed Douglas fir structure. Curtains and upholstered headboards add softness and texture to the bedrooms.

The central courtyard features planted borders that contribute to the site's biodiversity, while an orchard next to the car park will eventually be used to supply the pub's kitchen with freshly grown fruit.

The office previously designed a house in London that sits within a sunken courtyard, and oversaw the modernisation of the 18th-century York Theatre Royal and its 1960s extension.