Architecture and design studio The DHaus Company has overhauled The Bull and Last pub in north London, adding boutique hotel rooms and a pair of Japanese-inspired duplex flats.

The project involved a complete renovation of the old pub, which started life as a coaching inn more than 300 years ago.

At a time when many of the UK's pubs are closing down the goal for The DHaus Company was to "help the pub stay a pub".

This original coaching inn burnt down in a fire in 1883 but was rebuilt as the structure that exists today. The challenge for architects David Ben Grunberg and Daniel Woolfson was to rationalise this building without losing its historic character.

An important change was to remove a separate kitchen and toilet block located to the side of the main building, which freed up space for redevelopment. Here, the architects added a residential building that could be privately sold.

One occupies the ground floor and top-lit basement, while the other is located on the first and second floors.

"We worked closely with the chief conservation officer of the Camden Planning Department," said Grunberg.

"He really wanted the design to be subservient to the pub, like an old coach mews house, or feel like a younger sibling," he told Dezeen. "He also loved our concept of an ancient Asian jewellery box, as an aspiration of quality and richness."

This jewellery box concept was the inspiration behind the chequerboard details that feature on the building's exterior.

This pattern features on the powder-coated aluminium privacy screen on the front facade, which is black to match the colour of the pub. 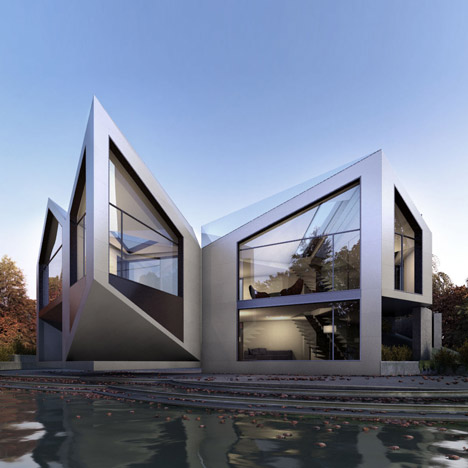 At the back, where the building becomes white, the pattern is repeated in large sections of brickwork.

"Some people see a movement in the brick screens, like it's mimicking the movement of the street," suggested Grunberg.

In the main building, facilities were completely modernised through a series of works that included a new basement, a loft extension and the addition of a commercial kitchen.

The architects recall one of the engineers describing the project as "a baptism of construction" due to the scope of work required.

Six hotel rooms were added upstairs, with the idea of reinstating the building's original function as an inn.

The interior design of each room was planned in tribute to a different historical figure from the area including poet John Keats and nightclub hostess Ruth Ellis.

The rooms all feature wood-panelled walls, matching those of the pub below, along with details that include jib doors, vintage desk consoles and roll-top baths.

In the main bar and dining area, most of The Bull and Last's existing details have been preserved.

Timber lines the walls and bar, while taxidermy bulls take pride of place above the bar.

The project has more of a traditional character than others that The DHaus Company has completed in the past. Grunberg and Woolfson's portfolio includes a concept for a shape-shifting house and a Dezeen-competition-winning vision for flood-proof future houses.

The pair got involved in the project after a mutual friend introduced them to the pub's owners, Ollie Pudney and Joe Swiers.

The collaboration has proved so successful that Pudney and Swiers have since decided to move into the two duplex flats themselves, rather than sell them on.

Photography is by Richard Chivers, Joe Howard and Serge Kouperschmidt.