Swedish startup Stilride has unveiled the electric Sport Utility Scooter One, which is manufactured from stainless steel using an origami-like process that reduces the amount of material used.

Built using a method described as "industrial origami", the scooter's body was made from stainless steel folded into shape by robots.

According to the company, this method can significantly reduce the environmental impact of production compared to conventional manufacturing techniques as it requires fewer raw materials and components.

Named Sport Utility Scooter One (SUS1), the scooter is Stilride's first product and will go on sale in Europe later this year.

While conventional scooters consist of a tubular frame and a plastic body, the SUS1's chassis is constructed by taking a single sheet of stainless steel and cutting and folding it.

Its curves and intricate shape are created using specially developed software that controls a system of robotic arms and laser cutters commonly used to build vehicles.

"There are limitations when it comes to sheet metal: either you go down the workshop line where you are cutting, welding, and bonding and the level of refinement is pretty basic but it can be done by a company that doesn't have much money for research and development," said Stilride co-founder Tue Beijer.

"Or you have pressing sheet metal like the car companies do, where you have high refinement but the cost entrance level is huge and you have to be producing thousands of units," he told Dezeen.

"So it's been in my head for years: what if you can take the good things from the workshop and the freedom of not having to fold things over straight lines? That's why I started to think about curve folding."

Curve folding is a well-established craft but has rarely been used in manufacturing. Modernist Danish architect Arne Jacobsen used the technique with plywood to produce his famous Series 7 chair.

Co-founder Beijer made the first SUS1 model out of folded paper, with the concept developed as part of a research project with the Metallic Materials programme, funded by the Swedish government's innovation agency, Vinnova.

A result of its origami production, the SUS1 has a distinctive aesthetic that gives it a physical presence similar to classic scooters such as the Vespa or the Lambretta.

"The curve folding itself creates a unique design DNA which is instant," he added. "It's like a dance between the sheet metal and the design. You are not totally liberated; you have to work with what is possible with the metal." 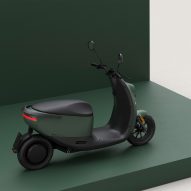 Stilride is planning to also create a production process to allow the SUS1 to be manufactured from flat-packed steel sheets in local factories across Europe. This process would further reduce the scooter's carbon footprint.

"We piggyback on existing workshops that are today working with laser cutters and robotic arms," explained Beijer. "It's a bit like making a three-course dinner when you look in your fridge and see there is not much in there."

"When we start off it is going to be a premium brand, but over time we will also launch products more for the mass market," he added.

Stilride will next look to use its curve folding technique to develop cargo bikes and trailers.

Other innovative electric motorcycle designs include the bikes from fellow Swedish brand Cake being used to catch poachers in the South African bush.

The photography is courtesy of Stilride.