German mobility company Unu has launched the second generation of its electric scooter, with smart features including anti-theft protection and digital key sharing.

A digital key function built into the accompanying app allows users to share access to the electric scooter with their friends and family. This function also enables neighbourhood sharing schemes to be implemented and managed.

"This [feature] paves the way for micro-sharing for the first time," said Unu co-founder and chief experience officer, Elias Atahi.

"This way we're introducing a new scooter usage model for urban mobility. However, networking in a small group is only the beginning."

The anti-theft protection feature allows users to check the location and charging status of their scooter from anywhere.

If the scooter is moved in the absence of the user, the anti-theft technology is activated and the user is alerted to the scooter's location via the app.

The app can also be used to set a destination for navigation. Users are then guided by maps displayed on the integrated screen, meaning they can put their smartphone away whilst on the move.

Two 1.7 kWh batteries increase the scooter's range to 100 kilometres and the mounting of the hub motor in the rear single-sided swingarm frees up space for a larger storage compartment under the seat.

Other key developments include a larger seat that can accommodate two riders, and a range of smart features that can be activated using an accompanying app.

The scooter – which launched in three models and seven colours – will be delivered to users ready to drive, with licence plates and insurance included.

Unu worked with leading technology firms such as Bosch and LG to improve the performance of the scooter, which it claims now offers one of the fastest acceleration values of any electric scooter.

The combination of the Unu app and the scooter's integrated digital display enables the various smart features to be activated optionally and free of charge by the user. 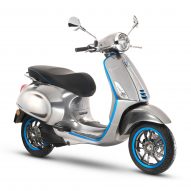 Piaggio's all-electric Vespa set to hit the roads in 2018

"The consistent fusion of hardware and software in the new Unu Scooter opens up new possibilities for Unu users," said the company in a statement, adding that new functions will be added over time.

The company's stated aim is to allow people to enjoy the full potential of city living by providing mobility solutions that are "affordable, fast, effortless, clean and appealing".

The creation of a network of electric mobility devices represents the second phase of a three-part plan outlined by Unu.

The final phase involves developing a fleet of electric, networked, autonomous cars, which the company insists will represent "the ideal city vehicle".

The Unu scooter will begin to ship in spring 2020. It will join other electric scooters already on the market, including an electric version of the iconic Vespa, and a Taiwanese "Smartscooter" featuring power cells that can be swapped out at battery vending machines.