Designer Bertjan Pot offers a look inside his studio and introduces his designs for Moooi in this exclusive video produced by Dezeen for the Dutch brand.

Pot invited Dezeen to his Rotterdam studio, a converted gymnasium, where he demonstrated his process and showcased various products he has designed for Moooi, as well as some of the woven masks that he is known for making.

"I'm constantly trying things out, how they fit together," he said, "Some of these things, I consider a prototype. And sometimes a prototype actually becomes a product."

Pot has designed products for Moooi since near the brand's inception, including lights, chairs and a carpet.

His first piece for the Dutch furniture brand was the Random Light, which he initially made by hand himself before the design caught the attention of Moooi founder Marcel Wanders.

The designer made the first run of the lights by randomly wrapping a resin-soaked thread around an inflated balloon, which he then deflated and removed to leave a hard spherical shell that acts as a lampshade.

"The first lights I just made to order, and I would deliver them myself," he explained. "I had all these fibres from glass yarn, and I had balloons, and I had resin, so I started coiling the thread in the most simple way around a big balloon."

"Then Marcel Wanders called and said 'hey, I've seen your lights, would you like the Random Light in Moooi?'"

Pot went on to design Heracleum, a suspension light comprised of a branching metal structure and a multitude of small LED lights.

He showed Dezeen the latest version of the design, the Heracleum III Linear, which is designed to hang above long surfaces such as dining tables or kitchen islands. The new version of the light has also been updated with brighter LEDs and better integration with smart home systems. 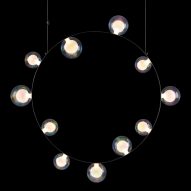 The Heracleum light was named after the flower of the same name, which was a reference for the piece. However, Pot also noted the mathematical influences behind the design of the light fixture.

"For me, the Heracleum is a lot more about math than about nature," said Pot. "I always like it when there's more than one story with a certain product."

Reflecting on the process of experimental prototyping, Pot emphasised the satisfaction that he finds in the intuitive aspects of his craft.

"I love it when my hands can surprise my head," he said. "Your hands are making something and even the thing that you are fully in control of making can surprise you. I think that's a wonderful gift that comes with the profession."

He has designed a number of other products for Moooi, including the Carbon Chair designed in collaboration with Marcel Wanders, and the Prop Light, which evokes the mirrors of dressing room theatres with its strips of bare LED bulbs.

Dezeen interviewed Pot in 2016 at Milan design week, where he made a series of seats by weaving shoelaces around inner tubes from different vehicles as part of Nike's The Nature of Motion exhibition.

This video was published by Dezeen for Moooi as part of a partnership. Find out more about Dezeen partnership content here.