Norm Architects has converted a traditional timber cabin, hidden away amongst pine trees in a forest in Sweden, into a pared-back holiday home for families.

The Copenhagen-based studio took a "back-to-basics" approach when it came to remodelling the two-floor building, which is positioned on top of a ridge.

"And while the creation of a simple, authentic and welcoming space might seem effortless and natural once completed, the journey to simplicity and the exercise of finding essence is often rather complex and not an easy task."

On the home's ground floor, a cosy sitting room is dressed with a couple of plump greige sofas and a sheepskin-covered lounge chair, created by the practice in collaboration with Danish furniture brand Menu.

One corner of the room is occupied by a wood burner in the same off-white colour as the walls, which were coated in dolomite plaster.

On the other side of the ground floor lies a dining area, anchored by a large timber table. Just behind is the kitchen, housing a series of handleless low-lying cupboards crafted from oakwood.

Oak was also used to form the flooring and all of the doors throughout the cabin, which were designed by Norm Architects to act more like slender cabinet fronts so they don't take up too much space.

The doors are finished with circular brass knobs and extend all the way up to the ceiling, in a bid to make the rooms appear loftier. 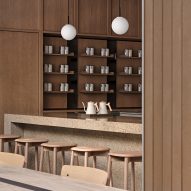 A number of new windows were inserted into the cabin's facade to allow more natural light into the interiors and reveal views of the towering pine trees outdoors.

Distributed across the rest of the holiday cabin are enough bedrooms and wash facilities to accommodate two families, as well as a small sauna.

For larger groups, the project also saw Norm Architects build a new self-contained annexe that can house a third family.

Here, a raised daybed-cum-window seat was set up directly next to a vast wall of glazing, providing occupants with a place to recline and take in the scenery.

"Designed for a simple life during both summer and winter months, the cabin is rustic yet refined, only equipped with the necessities when opting for a slow living," the studio said.

Dezeen has previously featured a number of other cabins in the country including Sommarhus T by Johan Sundberg, which takes cues from traditional Japanese architecture, and a seaside villa by Studio Holmber with serene plywood-lined living spaces.

The photography is by Jonas Bjerre-Poulsen of Norm Architects.