At 186 metres, the tallest of the towers is entirely residential, comprising 660 apartments spread over 50 floors above ground. The second tower, which is 170 metres tall, offers 39 floors of office space and rooms for the five-star Andaz hotel.

Pathways and gardens sprawl under the raised bases of the towers, and private terraces and public observation decks perch on the tops of roofs and cantilevered elements.

Six adjacent circular and semi-circular plazas form the basis of the buildings' plans, with the tower shape determined by the negative space in between the new public areas.

Its honeycomb facade is designed to give the towers a visual identity, accentuating their shapes while functioning as part of the buildings' inbuilt environmental regulators.

Deep hexagonal frames are designed to shade the facade from the sun, while the towers' concave facades should channel the wind to passively cool the public spaces below, creating "oasis-like" micro climates.

Creating spaces that are pleasant in a tropical rainforest climate without resorting to environmentally damaging air conditioning units is a challenge for architects working on large-scale developments in this part of the world.

Last month BIG and Carlo Ratti Associati broke ground on a tower in the financial district that will include an indoor tropical garden 100-metres in the air complete with sky-hammocks and cocoon pods.

Covered in tropical greenery in the form of open-air and covered gardens linked by walkways peppered with shops and restaurants, the parks of the Duo twin tower project will be open to the public 24 hours a day. Vehicles access the towers and underground parking spaces via ramps, keeping the pedestrianised areas separate.

"Instead of thinking about the building as just an object in its own right, we have designed the towers through examining urban space and reintegrating the area's existing architecture into something new," said the architect.

The scheme has been designed to transform a "neglected neighbourhood" into a bustling, "hive-like" zone at the foot of the towers.

"Duo is about a sense of urban responsibility," said Scheeren. "It shows how architecture can become a tool of reconciliation within an otherwise disparate and fragmented urban context. The project repairs a broken piece of the city and celebrates public life as the central quality of a socially responsible urban environment."

Scheeran has been outspoken in the past about the importance of architectural interventions going beyond the relative superficiality of a striking facade, calling upon fellow architects to examine all aspects of a building's function.

Other recent projects in Asia completed by Sheeran's firm include a tower with modular cutaways that make it appear pixelated in Bangkok, Thailand, and a vast art museum on the edge of Beijing's Forbidden City in China.

The German architect has praised the cities of the subcontinent for displaying a "fearlessness and vision for the future". At the end of last year he unveiled plans to build a 333-metre-high tower in Vietnam's Ho Chi Minh City complete with an elevated podium "sky forest".

Video and Photography by Iwan Baan. 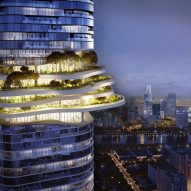