The Malin is a design-led co-working space in Manhattan that blends contemporary colours and textures with original architectural elements that are "quintessential to the iconic Soho loft-style".

Located at 32 Mercer Street in New York City, the workspace's interior design was led by Jordan Trinci-Lyne and Jean Morana, in collaboration with Fettle Design.

Described as having an "adaptable floor plan", The Malin is made up of 38 individual desks as well as a library, three office spaces, three conference rooms, four booths reserved for video calls and various other meeting areas, including a barista kitchen.

According to its designers, the co-working space intends to maintain the building's traditional elements – such as existing columns, high ceilings and large windows – and combine them with vibrant colour and material palettes that are designed to reflect the creativity of its members.

"The space is very open, with tons of natural light that is filtered throughout. We also incorporated custom arched doorways in solid oak and glass, which are a nod to windows that are typical to buildings in the neighbourhood."

Familiar white walls and hardwood floors form the backdrop of the workspace, which is dressed with more colourful accents such as low-slung bouclé seating arranged in vibrant clusters, as well as touches of Calico Wallpaper.

McGuigan explained that each of The Malin's areas was led by "the psychology of colour, designed to inspire our members' best work".

Calming, blue-on-blue tones were chosen for the library, which was designed as a refuge for silent work, while the remaining areas favour a palette of bright, bold and saturated hues that stand out against their neutral backdrop.

"Energy equals productivity and that's a fundamental output we want the design to facilitate," said McGuigan. "Elevated materials like mohair, leather, and rare marble were included as an aspirational touch to contrast the typical work-from-home experience." 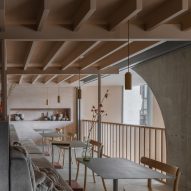 Individual desks framed by Eames Soft Pad office chairs are crafted from solid oak and are subtly separated from each other with recycled crystal dividers.

Pared-back, diner-style pendant lights are suspended above plump, emerald green booth-like sofas, which make up an informal space for The Malin's members to gather.

A curated art collection decorates the walls, while design elements from brands such as Flos and Orior – another of McGuigan's ventures – also feature in the space. Charging outlets are positioned close to every piece of custom furniture to create an accessible working environment.

The team explained that The Malin was created to encourage its members to return to a public workplace in the wake of the coronavirus pandemic, balancing quieter areas with those built for socialising within an eclectic interior design.

"It has all the functionality of an office space, but with the comfort of a home," said McGuigan.

The Malin opened in October 2021, joining a host of other colourful co-working spaces around the world. These include Note Design Studio's Douglas House, an office building in London with contrasting bright hues; and Spatial – a Montreal mint green and burgundy co-working space by Ivy Studio that features a zinc reception desk with a rainbow-coloured finish.

The photography is by Thomas Loof.