Reaching 93 storeys and 1,066 feet (325 metres) tall, The Brooklyn Tower is the first in the borough to claim supertall status.

The mixed-use tower, which was formerly called 9 DeKalb, will contain condominiums starting on the 53rd floor, with rental residences below, and over 100,000 square feet (9,300 square metres) of retail space in the Dimes Savings Bank of Brooklyn at its base.

The building is the latest supertall skyscraper – defined as measuring between 984 and 1,969 feet (300 and 600 metres) tall – to reach its full-height in the city.

It has a broader base than many of the skinny skyscrapers across the East River, some of which have reportedly experienced engineering issues as a result of high winds.

According to SHoP Architects' founding principal Gregg Pasquarelli, his skyscraper's broader shape will enable it to avoid similar problems.

"This is a fundamentally different building than the other supertalls in the city with a considerably wide base," Pasquarelli told Dezeen. "So in many ways we had that advantage from the start."

The layout of less-dense Brooklyn and the integration of a historic building into the tower's base have both contributed to its larger footprint.

"The design of The Brooklyn Tower arose from the native geometries of its triangular site and location in Downtown Brooklyn," said Pasquarelli.

The Dime Savings Bank of Brooklyn, a landmark building that dates back to 1908, was incorporated into the tower and also informed some of SHoP Architects' design decisions. 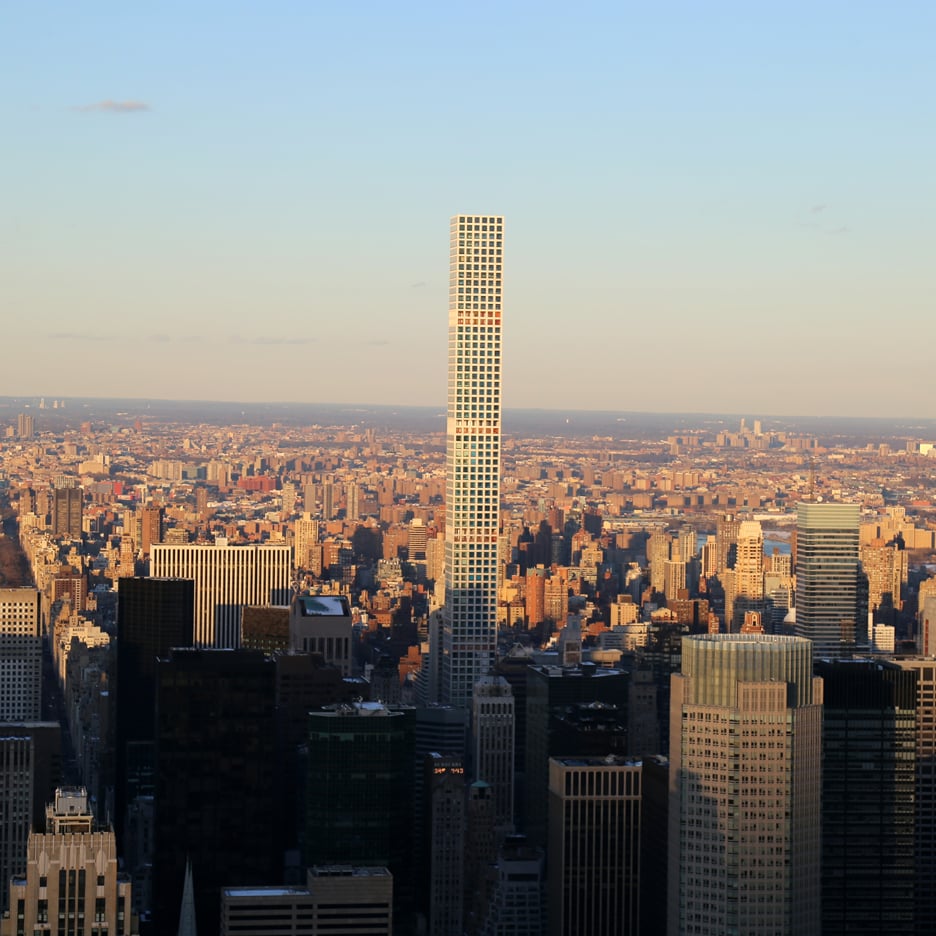 Elements from the interior of the bank – including the hexagonal shapes, geometric patterning and rich materials – influenced the tower's form and facade treatments, according to Pasquarelli.

"The building's distinctive materiality incorporates elegant white marble at its base and evolves to blackened stainless steel and shades of bronze and copper as the tower ascends," the architect said.

With setbacks that narrow to a point, the tower is accessible from two points from the ground.

The first on Fleet Street is intended as a residential entrance, with interiors by Krista Ninivaggi of Woods Bagot that feature restored marble and a double-height atrium with "white oak walls cut into a sculptural pattern".

The other entrance is into the retail area through the restored Dime Savings Bank on the Flatbush Avenue Extension.

Gachot Studios designed the interiors for the tower's residences, which will include 150 condominiums, and 400 rental residences with 30 per cent designated for middle-income housing.

The Dome Pool and Terrace will include three swimming pools that surround the historic bank's roof, while the 66th floor of the skyscraper will have the highest basketball court built anywhere in the world, not accounting for altitude.

Other supertalls recently completed in the Big Apple include One Vanderbilt by Kohn Pedersen Fox. Last year, Dezeen compiled a list of supertalls changing the skyline of the city.

SHoP is based in New York and known for its work on the Barclays Center, not far from The Brooklyn Tower. The firm's workers recently moved to unionise in response to an alleged culture of "endless overtime and deadlines".