Awards should not "glorify the architect" but they can draw attention to worthy projects, according to Bangladeshi architect Kashef Chowdhury, winner of this year's RIBA International Prize.

Chowdhury explained that he was "very surprised" when the Friendship Hospital, designed by his studio Kashef Chowdhury/URBANA, won the 2021 RIBA International Prize – a biennial award given to a project that "demonstrates design excellence and social impact" – early this year.

"I'm not saying we have created the best hospital in the world, but I'm saying for the given budget for the given community what we tried to do was not make a place that is dreadful," Chowdhury told Dezeen in a video call from his Dhaka-based office.

The Friendship Hospital is a low-cost medical institution that provides healthcare for thousands of people living in Satkhira, a remote area of Bengal in southwest Bangladesh where the project is located.

The hospital demonstrates Chowdhury's strong focus on community, climate, context and local materials. His work often sees him collaborating with non-governmental organisations, such as Friendship – for which he created the hospital – to empower disadvantaged communities in rural areas of Bangladesh.

He explained that he was shocked to win the award as Bangladesh is not often included in the international discourse around architecture.

"I was very surprised by the results of this award," said Chowdhury.

Chowdhury believes that international awards, such as the RIBA International Prize, should not be used to make celebrities out of architects, but to highlight thoughtful and responsible architecture.

"An award is not to glorify the architect – I don't believe in the star system, so to speak," he said.

"I don't believe in the image of the architect or the studio," he said. "I think we as architects are ordinary people, but what we do is not ordinary."

"Our work is important, not us – we are here today, gone tomorrow, but the work stays whether we like it or not."

"We have to be responsible"

Architects have a responsibility to create buildings that are context- and climate-conscious, as those built will often last for many years, said Chowdhury.

"Most of the work that we do is going to stay for centuries, or let's say decades; we have to be responsible because architecture is married to the place where it is created," he explained.

"It stays there, so we have to be very, very careful what we do."

Chowdhury established his architecture practice, URBANA, in 1995 with 2021 Soane Medal winner Marina Tabassum, who was a partner for ten years.

Tabassum recently spoke to Dezeen to discuss her practice and why she only works in her home country of Bangladesh.

Chowdhury explained that his studio does not centre its work around the massing of a building but instead designs around the context, philosophy and ethics at the core of the project.

"It's not because of the composition of our hospital that it looks the way it does, it is because of a response to the context or the layers of the contexts." 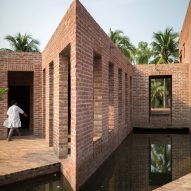 Friendship Hospital demonstrates Chowdhury's focus on climate-conscious architecture, which he is a strong advocate for.

This is especially important in countries like Bangladesh where rising sea levels will have a huge impact. In recent years, the region where Friendship Hospital is located has become increasingly waterlogged as a result of the climate crisis.

"These things are beyond our control," said Chowdhury. "Since the days we came out of the caves and built our own shelters we thought we conquered nature."

"We have to do this collectively"

Chowdhury believes that architects should look at situations, case studies and contexts from across the world to develop solutions and effective responses to the issues of climate change.

"We don't need to talk big, we need to look at micro situations like [Friendship Hospital] in Satkhira, and far away places, like the islands in the Pacific, and really try to figure out how to do this, but it has to be a concerted effort," he said.

According to the architect, real-world action, such as reporting and educating, rather than international conferences, is what is needed to address the issues of climate change.

"Conferences are not going to cut it," he said. "There really needs to be more reporting and trying to make people understand what is happening because the people themselves don't understand, I did not understand it."

"We always say she and mother nature and that's how it became traditionally. But if you look at us, we are more destructive than we are caring. And that it's really something to think about." 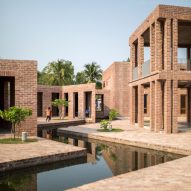 In February, British-Iranian architect Farshid Moussavi was named the winner of the 2022 Jane Drew Prize for elevating the profile of women in architecture.