The Friendship Hospital in Bangladesh by local architecture studio Kashef Chowdhury/URBANA has been awarded the RIBA International Prize 2021.

The hospital is the latest winner of the RIBA International Prize, which is awarded biennially to a project "that demonstrates design excellence and social impact".

The Friendship Hospital is a low-cost and remote medical institution in Bengal, southwest Bangladesh, which provides healthcare services for thousands of people living in the region.

It was created by Kashef Chowdhury/URBANA for Friendship, a non-governmental organisation that exists to empower people living in remote rural areas.

Surrounded by shrimp fisheries, the building is composed of a series of low-lying pavilions that are made from locally sourced brick and interspersed with courtyards.

These courtyards are used to naturally light and ventilate the hospital wards while also offering patients and visitors places to rest.

The more sensitive areas of the hospital are screened by corridors and double-layered arches, shielding them from the tropical sun.

Kashef Chowdhury/URBANA has bisected the site with a zigzagging "canal", which separates the inpatients and outpatients while helping to cool the building.

At either end of this pool of water are two large tanks used to collect rainwater, which is stored and harvested for use at the hospital while preventing waterlogging on the site.

Kashef Chowdhury/URBANA and Friendship also recently collaborated on the design of the Friendship Centre in Bangladesh, which comprises a similar labyrinth of brick walls and courtyards.

Friendship Hospital was selected as the winner from a shortlist of three projects, which included James-Simon-Galerie by David Chipperfield Architects and Lille Langebro by WilkinsonEyre and Urban Agency.

Decq said that the Friendship Hospital was chosen as the winner as it "embodies an architecture of humanity and protection".

"Kashef Chowdhury/URBANA has achieved a building designed with a human touch which is deftly integrated with its surroundings and celebrates local, and traditional crafted materials," added Decq.

"It is a demonstration of how beautiful architecture can be achieved through good design when working with a relatively modest budget and with difficult contextual constraints. This hospital is a celebration of a building dedicated to humans."

The winning studio's founder, architect Kashef Chowdhury, said that he hopes the prize will encourage more "architecture of care both for humanity and for nature".

"In a sublimely important moment, RIBA and the jurors have identified a project from the global periphery to bring to the centre of architectural discourse and be the subject of one of the most important global awards," Chowdhury reflected.

"I am encouraged that this may inspire more of us to commit, not in spite of, but because of limitations of resources and means, to an architecture of care both for humanity and for nature, to rise collectively to the urgencies that we face today on a planetary scale."

As part of the same award programme, Tehran studio Hooba Design Group has been awarded the prize of RIBA International Emerging Architect 2021. The prize, which "celebrates the design innovators of tomorrow", was given to the studio in recognition of the Kohan Ceram Central Office Building that it designed in Iran.

Kohan Ceram Central Office Building is distinguished by its bright terracotta-coloured facade that is composed of bricks with glass inserts. 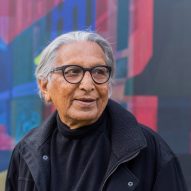 Chair of the RIBA Awards Group Denise Bennetts described the building as having "an architecture of restraint, invention and elegance".

"An uplifting and inspiring design, this project as well as the Hooba Design Group’s collaborative approach to innovation, qualifies them as a worthy recipient of the RIBA International Emerging Architect 2021," Bennetts added.

The RIBA International Prize was launched in 2015 in replacement of the former Lubetkin Prize. Dezeen is a media partner for the event.

Among the previous winners of the prize was Grafton Architects for its Universidad de Ingeniería y Tecnología in Peru and the Children Village in Brazil by Aleph Zero and Rosenbaum.

The announcement of the 2021 winners follows the prestigious RIBA Stirling Prize award programme and the Royal Gold Medal for 2022. This year, the prizes were awarded to Grafton Architects for the Kingston University London – Town House and Indian architect Balkrishna Doshi respectively.

The photography is by Asif Salman courtesy of Kashef Chowdhury/URBANA, unless stated.