British-Iranian architect Farshid Moussavi has been named the winner of this year's Jane Drew Prize for elevating the profile of women in architecture.

Moussavi, who is also an educator and writer, founded Farshid Moussavi Architecture in 2011 and previously headed up Foreign Office Architects with Alejandro Zaera-Polo.

The Jane Drew prize is awarded annually by The Architectural Review and Architects' Journal as part of its W awards series, previously known as the Women in Architecture awards.

Moussavi joins Denise Scott Brown, Kate Macintosh and Yasmeen Lari on the illustrious list of architects to have won the prize, which is named after modernist pioneer Jane Drew.

"It is a very great honour for me to receive the Jane Drew Prize, which has done so much to draw attention to the achievements of women in the field of architecture," Moussavi told the event organisers.

"There are relatively few role models for women in architectural practice and I believe that this allows them freedom to be more creative in responding to the urgent challenges facing architects today, whether these challenges are finding new and more generous uses for buildings, as well as new languages in which to engage a larger and more diverse public, or addressing climate change to protect future generations." 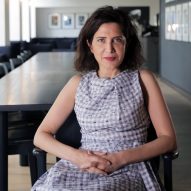 Farshid Moussavi to design first Ismaili Center in the USA

Moussavi was born in 1965. She studied to become an architect at Harvard's Graduate School of Design (GSD), University College London and University of Dundee.

Among her key projects is the Museum of Contemporary Art in Cleveland, Victoria Beckham's flagship store in London, and Jardins de la Lironde in Montpellier.

Moussavi curated the Royal Academy's Summer Show in 2017 and was awarded an OBE in 2018 for her services to architecture.

While practising as an architect, she teaches at Harvard's GSD and is a board member of New Architecture Writers – a free course in London for aspiring architecture critics from the BAME community.

Coinciding with the Jane Drew Prize, British-Palestinian artist Mona Hatoum has been named by the W awards as the recipient of its Ada Louise Huxtable Prize for 2022.

The award, named after American architecture critic Ada Louise Huxtable, honours women contributing to the wider architectural industry. Hatoum was selected in recognition of her explorations of gender through the lens of the domestic world. 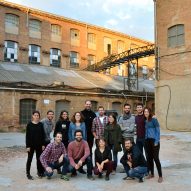 Moussavi and Hatoum will both speak at the W Lunch in London on 3 May, where the winners of two other awards – the Moira Gemmill Prize and MJ Long Prize – will be announced.

The Moira Gemmill Prize is awarded to emerging women architects, while the MJ Long prize recognises excellence in practice. Last year, these were given to the female partners of Barcelona collective Lacol and Peter Barber Architects' associate director Alice Brownfield respectively.

The portrait of Farshid Moussavi is copyright Dezeen.