The 3-2-1 Qatar Olympic and Sports Museum is located in Doha and adjoins the Khalifa International Stadium, one of the eight stadiums that will be used for the 2022 FIFA World Cup Qatar.

The museum measures 19,000 square metres and is comprised of two volumes: a curved building that subtly hugs the Dar Al-Handasah-designed stadium, and a cylindrical, ring-wrapped volume that protrudes from the side of the stadium.

The glazed tubular structure is encircled by five Olympic-coloured rings that wrap around the museum at different heights and angles – a nod to the interlocked rings of the Olympic logo.

Jali-like screens, traditionally used in Islamic cultures to provide privacy, were placed horizontally between the rings and the glazed facade, providing a decorative element that ties the building to the history of Qatar and its culture. 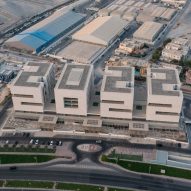 This volume, adorned in rows of diamond-shaped panelling, follows the curvature of the tallest sides of the stadium and snugly sits between the stadium and the structure wrapped in Olympic rings.

The 3-2-1 Qatar Olympic and Sports Museum, which is now open to the public, houses seven exhibition spaces as well as a cafe, a restaurant and a gift shop.

Each of its seven exhibition spaces focuses on a different theme, including sections on "A Global History of Sport", "The Hall of Athletes" and "Qatar Sports".

"This is the very first museum in the Middle East dedicated to achievement in sports, to exploring the profound role of sports in society and in our personal lives, and is the only Arab institution to join the international Olympic Museums Network," said chairperson of Qatar Museums Sheikha Al Mayassa bint Hamad bin Khalifa Al Thani.

Opposite the Khalifa International Stadium, architect Ibrahim M Jaidah designed a building in the numerical shape of the year 2022 to mark the country hosting the FIFA World Cup.