British architect Norman Foster has designed the displays for and curated the exhibition Motion: Autos, Art, Architecture at Guggenheim Bilbao, which showcases a number of his own cars.

Spread out across an entire floor of the Frank Gehry-designed Guggenheim Bilbao, the exhibition features cars from the 20th and 21st century, as well as architecture and artworks connected to speed and movement.

Foster, one of Britain's most renowned architects and founder of studio Foster + Partners, approached Guggenheim himself with the idea for the exhibition in an attempt to share his passion for cars.

The architect revealed that the first car he drove was a 1935 Morris Eight.

"I've always been passionate about design in locomotives, aircraft and cars and I've been privileged to pilot many different kinds of planes, helicopters, power planes, jets and to be able to drive a wide variety of vehicles," Foster said at the exhibition opening at Guggenheim Bilbao.

"As one eminent designer said, to take your pleasure seriously, how could that manifest into an exhibition?" he added.

"So I approached the Guggenheim in New York with the idea and out of that I was asked to create this exhibition."

While he worked closely with industry leaders, researchers and advisers, Foster was given total freedom when it came to selecting the cars on show.

"Obviously behind the choice, there have been many enjoyable discussions with individuals whose judgment I respect but in the end it's a very personal choice," he said. "It's totally subjective."

Nine of the cars on show are from Foster's own collection, including the Chrysler Airflow from 1934, the Jaguar E-Type from 1961 and the Dymaxion Car 4, 2010 (below).

Upon entering the gallery, visitors are welcomed by vehicles from the 20th century including Porsche's first car, the Porsche Phaeton, and a Rolls Royce 40/50 Alpine Eagle from 1914.

Also exhibited in this room are artworks on movement by the photographer Eadweard Muybridge, drawing attention to the interest in speed and motion at the time.

Throughout the other seven galleries in the exhibition, cars are displayed on raised black platforms designed by Foster.

From mass-produced cars like the 1951 Volkswagen Beetle and an original Mini Cooper to the lowest car in the world – the concept sports car Lancia Stratos Zero – and the Mercedez AMG Formula OneW11 EQ Performance racing car from 2020, visitors can trace the history of the car in chronological order through themes including sculptures, sports, visionaries and Americana.

The exhibition also highlights the trend toward electrification and uses university student designs to showcase what the future of mobility may look like.

Dotted throughout are sensory features, including the sound of a racing car roaring past every 15 minutes and a clay-modelling studio, that aim to create an immersive experience. 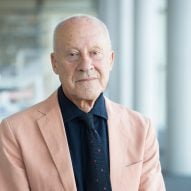 According to Foster, two broad themes of "beauty and technology" tie the exhibition together.

"There's a utilitarian beauty for me in say a Jeep or a Deux-chevaux in the same way as the extraordinarily curvaceous, luxurious, customised car bodies of a certain period."

Foster also aimed for the exhibition to demonstrate how the vehicle's transformation is intrinsically linked to developments in art and architecture, and to shine a spotlight on the relationship between different disciplines.

"The exhibition considers the affinities between technology and art, showing for example how use of the wind tunnel helped to aerodynamically shape the automobile to go faster with more economic use of power," said the museum.

Foster became the 21st Pritzker Architecture Prize Laureate in 1999 and was the head of the 2021 RIBA Stirling Prize.

He founded the studio Foster + Partners, which is responsible for numerous high-profile buildings around the world including the Apple Park campus in California and the City Hall in London, in 1967.

Motion: Autos, Art, Architecture is on show from April 8 to September 18, 2022. For an up-to-date list of architecture and design events, visit Dezeen Events Guide.