Installed by Ban with the Voluntary Architects' Network non-governmental organisation (NGO), which he founded in 1995, the modular system offers privacy to people seeking refuge in the hastily constructed refugee centres.

The Paper Partition System (PPS) is quickly and easily constructed using cardboard tubes as structure and textiles as partitions. One unit takes approximately five minutes to build with the help of three people.

Since the war began in the early hours of 24 February, the system has been used in shelters in Lviv in western Ukraine, in Poland and France. It is due to be rolled out in refugee centres in Germany and Slovakia too.

PPS was created by BAN in 2011 as a deliberately simple solution to increase privacy in vast evacuation centres housing people made homeless by natural disasters.

It was first used in shelters following the Great East Japan Earthquake (2011) and has since been repurposed for Covid-19 vaccination booths and now refugees escaping conflict.

Ban presented the project last week in a webinar hosted by the EU's New European Bauhaus – an interdisciplinary initiative with a focus on the European Green Deal – for which he is a key member and with whom he has collaborated on the rollout in Poland.

During the event, he said he felt compelled to help after seeing refugees gathering in shelters that offer little in the way of privacy.

"After the war started, I saw the situation of refugees gathering, staying under the big roof of a gymnasium without any privacy," Ban explained.

"I believe that privacy is a basic human right," he stated. "I saw my solution of paper partitions, which I developed for the earthquake and tsunami in Japan, as appropriate."

The PPS system makes use of round cardboard tubes as a structure, over which paper or fabrics are draped.

Fastened with a safety pin, the fabric forms the partitions and divides a space up into sections similar to shared hospital wards.

The tubes that make up the structure are the same as those used to roll up and store fabric or paper but in longer lengths. They are also made in two diameters to form posts and beams.

When combined, the units vary between two by two metres or 2.3 by 2.3 metres depending on the size of beds they contain.

Ban's eponymous studio is currently funding the scheme, while a number of companies are donating fabric and cardboard tubes.

The first installations were in Chełm and Wrocław in Poland. Through the networks of the New European Bauhaus, they were built by Ban in collaboration with a number of Polish architects, students and volunteers. 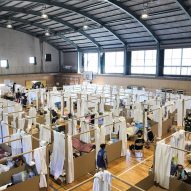 In Chełm – the first stop in Poland for train lines from central and northern Ukraine – the system was deployed in a vacant supermarket, while in Wrocław, they helped transform a rail depot into a shelter.

Over in Paris, the system has been used to compartmentalise two gymnasiums housing refugees.

Kyiv practice Balbek Bureau is another architecture studio to develop a modular system for people made homeless during the war in Ukraine. Named Re:Ukraine, the blueprint proposes "temporary but dignified" refugee villages based on a standardised timber-framed box that can be fitted with different interiors.

Other notable architects and studios who have responded to the war include David Chipperfield, Foster + Partners, MVRDV and Herzog & de Meuron – all of which have withdrawn from their projects in Russia.

The photography is by Nicolas Grosmond unless stated.