Designed for a family local to the area, the three-storey 100JOA home occupies a tight row-house site, with a small walled garden at its rear surrounded by neighbouring buildings.

Barcelona-based Vallribera Arquitectes' aim was to open up this site to the outdoors, creating a stepped form with a series of terraces that overlook the garden.

"The goal of the distribution [was] to turn this disadvantage of the location into a strong point," explained the practice.

"We envision the courtyard as another room in the house, without a roof," it added.

Due to the party walls at either side, light is brought into the home through a large skylight at the top of a lightweight, white metal staircase at its centre.

A combined living, kitchen and dining space sits on the ground floor, with bifold glass doors opening onto a patio space where a built-in barbecue area is sheltered by a wooden awning.

Above is the bedroom floor, where a larger room at the front of the home is separated by the staircase and a playroom from two smaller rooms at the rear, each of which opens onto a paved terrace.

On the second floor is a large work or play space for the whole family to use, which connects to another terrace space overlooking the garden.

At each level, bathrooms, storage and service areas such as a pantry and laundry room have been pushed against the northern party wall. This increased the availability of light and space in the living spaces. 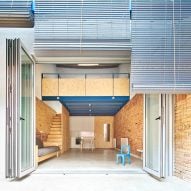 Finishes in the home have been kept minimal, with structural elements such as concrete joist left exposed and painted white, and the wooden framework left exposed on areas of the walls and window frames.

This is contrasted by black tiling in the bathrooms and black countertops and cabinets in the kitchen, which is organised around a tiled island.

"We wanted the ceilings and terraces to look rough, coarse and heavy," said the practice. "The staircase, by contrast, should be light."

"The stair, the wall of the service core and the tiled areas are more refined; they require a high degree of attention to detail," it continued.

A similar approach has been taken in the garden, with the rough exposed stonework of the wall contrasted by the black tile-work of the barbecue and white-tiled bench above the lawn.

The home's street facade is painted a pale sage green, while windows are covered by wooden blinds that match the rear garden's awning.

Other homes recently completed in Barcelona include a yellow house by architecture studio MACH, which references the high-tech architecture movement with industrial finishes and materials.