A facade of bright yellow steelwork and an industrial-style interior informed by the high-tech architecture movement define this house in Barcelona, designed by local architecture studio MACH.

Located on a backstreet close to Parc Güell by Antoni Gaudi, the dwelling called Casa Collumpio combines living areas with space for MACH's own office.

Casa Collumpio is conceived as a stack of three flexible, open floors around a central core, which are enclosed as simply as possible to allow them to "evolve" over time to suit its inhabitants.

"The house was designed from the very beginning so that every floor was completely opened," MACH told Dezeen.

"Of course, the idea is for the living and kitchen floor to stay the same, but the semi-underground level and the first floor were originally planned to contain two bedrooms, each with light walls that could be removable or changed in the future," the studio continued.

Casa Collumpio sits on a heavy concrete plinth containing the slightly sunken ground floor, with its two upper floors built from a lightweight steel frame that is infilled with blockwork and plastered walls.

Inside, the concrete ground floor contains a bedroom while the first floor has a living room and kitchen.

Underneath a corrugated steel ceiling, the top floor offers a space for a second bedroom that is currently used by MACH as a studio. 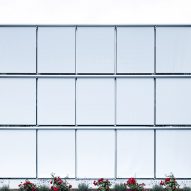 The idea of flexibility is emphasised by the materials in Casa Collumpio's interior being left exposed, bringing an industrial feel that is continued in the steel and concrete furnishings.

This rawness is contrasted by the bright yellow finish that has been used on the facade, rear elevation and staircase, which was informed by British high-tech architecture of the late 20th century.

"At this time, the Eames House by Charles and Ray Eames and 22 Parkside by Richard Rogers played a really important factor, and later we came across the unbuilt Yellow House by Peter and Alison Smithson," the studio told Dezeen.

"The final decision of painting it yellow was not decided until the very end, and it's kind of an homage to them, to make the house more joyful," it continued.

MACH was founded by Laia Gelonch and Marc Subirana with studios in Madrid and Barcelona.

Elsewhere in Spain, Nua Arquitectures also recently used coloured steelwork to brighten the renovation of a historic home in Tarragona.

The photography is by Del Rio Bani unless stated.