British designer Michael Marriott has installed a makeshift beach shack made out of recycled stereos, bottle crates and fridges in the historic Harewood House in West Yorkshire.

Kioskö is Marriott's contribution to the Harewood Biennial 2022, where 16 artists, designers and makers are each presenting a "radical act" of craft.

The London-based designer used only found and discarded objects to build Kioskö.

The structure is installed in the 18th-century manor in a room known as the Spanish Library, which led Marriott to design it the spirit of the ad-hoc "chiringuito" bars and kiosks that are common in Spain.

"I am drawn to these makeshift structures for their directness and honesty," he said. "Each culture has its own version of the same idea."

The design boasts a sign formed of estate-agent placards, pendant lights made from upturned buckets and a sound system framed by recycled furniture, which is playing a soundtrack of Jamaican folk music.

Marriott's aim is to show the value and joy that can be found in resourcefulness.

"There is also an underlying political message: two fingers to commercial design and the establishment that gave birth to it," he said.

Kioskö is filled with an assortment of objects and curiosities.

Marriott has included several of his own products, many of which he sells on the webshop WoodMetalPlastic. These include bottle openers made from old bicycle wheel rims and a stool with a recycled plastic seat. 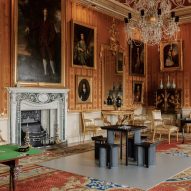 There are works by other designers, including a redesigned Union Jack flag in colours that represent all the different nationalities of people that live in London, and a plant pot that doubles as a bicycle lockup.

Each object is numbered and Marriott has produced a pamphlet that offers a narrative on each one, helping to further emphasise the value in these simple and everyday items.

"I wanted lots of different things from different places, and I wanted things that told stories," Marriott told Dezeen.

"Each one is a little anecdote, some politically charged and some personally charged," he said. "Mixing them all up, with the richness of all those graphics, made it feel more like a kiosk would be."

Radical Acts: Why Craft Matters is the second edition of the Harewood Biennial, which is curated by Hugo Macdonald.

The first edition, Useful/Beautiful, explored the relevance of craft in the digital age. This time around, Macdonald wanted to show the power of craft to influence social change.

Other projects in the show include a gaming table by Mac Collins that makes a statement against inequality and a treehouse by Sebastian Cox that symbolises a woodland management strategy.

"Michael is Mr Resourcefulness; his ethos is all about 'waste not, want not', and design fit for purpose," said Macdonald.

"In this wonderful piece, he celebrates a type of construction that exists all over the world, made by materials that people have to hand," he said. "It really broadens the spectrum of what constitutes design and craft."