Sited in the San Fernando Valley northwest of the city proper, Corazón del Valle will consist of three curved masses that the studio described as "fluid".

The shape, according to Perkins & Will, was dictated by the southwesterly winds that flow through the valley.

Each of the three structures has its own courtyard in addition to the open space between the buildings, and the whole complex sits a storey above street level, with a perforated concrete block wall encasing parking areas and retail.

"Funnelled through the massing into the landscape and drawn through the courtyards to bring fresh air into the shared spaces, gardens, and units," said the studio. "This negative space drives the design of the project and shapes the landscape."

Of the three structures, two will be smaller and rounded while the other will stretch out across the length of the site.

The surrounding neighbourhood is made up of a Goodwill facility, car parks and a high school.

This urban placement and a large amount of concrete, in addition to the usually arid climate of Los Angeles' interior,  increased the necessity of utilising the cooling winds.

The long volume will guide the wind to cool the public outdoor areas between the masses and the courtyards within the three structures.

In turn, this air supply will be used to ventilate the interiors.

To increase energy efficiency, the design has plants that will be irrigated with greywater from on-site laundry to mitigate the often dire water shortages in southern California, as well as an array of solar panels on the rooftops.

The project, with an anticipated completion date of 2024, will have 90 large family units and 90 permanent supportive housing units.

Permanent supportive housing (PSH) is a model "that combines low-barrier affordable housing, health care, and supportive services to help individuals and families lead more stable lives" according to the National Healthcare for the Homeless Council.

The PSH will include both studio and one-bedroom apartments.

The affordable aspects of the remainder of the accommodation will be two- and three-bedroom apartments. 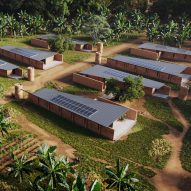 "At the beginning of the project, the Clifford Beers team met with the Supervisorial and Council District staff to discuss community outreach efforts and have coordinated with both offices ever since," said Yan Krymsky, design principal for Perkins & Will. "They continue to have monthly updates."

Krmysky also noted that the building started out as a 120-unit project but "increased in density due to support for affordable housing in the community".

Each building will also include retail as well as carved-out, covered public spaces, and indoor communities rooms on the first floor. Rooftop spaces will also be included and renderings show them coated in a bright orange paint with sail shading.

"Each massing contains a smaller courtyard that defines a smaller community and flows into the larger public spaces,  naturally scaling from public to private, from communal to one’s own," said Perkins & Will.

The ground floor of the project will include 2,000 square feet (186 square metres) of what the studio called "community supportive offices".

"The commercial space on the ground floor of Corazón del Valle will be occupied by the San Fernando Community Health Center, which will provide medical, dental, and lab services to residents as well as the community at large," said Krymsky.

A ground-breaking ceremony will take place in late April 2022 with LA's city council president planned to be in attendance.

Other housing complexes in the city include Brooks + Scarpa's recently completed 11 NOHO block in North Hollywood, as well as a project where shipping containers were used to build a community for the homeless.