The project, called 11 NOHO, is located in an emerging arts district in North Hollywood. The quarter-hectare site, which stretches along Camarillo Street, was formerly occupied by a small office building.

Brooks + Scarpa – which has offices in the Los Angeles area and Florida – wanted to create a building that diverged from the typical, solid apartment block.

The architects ended up conceiving a five-storey, rectangular building that is organised around a central courtyard.

They carved away parts of the housing block – including a sizable cut in the main facade – to create a sense of openness and to connect the building to its surroundings.

"11 NOHO eschews the typical neighbourhood defensive apartment buildings with solid walls and fences in favour of a carved-out cube – a beacon in the neighbourhood that celebrates social space by de-emphasising private space," the firm said.

The building has a white exterior that helps enhance natural light and reduce heat gain – the latter being an important consideration given the area's hot climate.

Exterior walls are wrapped in stucco and corrugated aluminium panels. Open-air corridors and balconies are lined with metal railings.

By including affordable units, the developer was able to construct a taller and denser building, while also helping address the city's housing crisis.

"This much-needed affordable housing provides poor and disadvantaged populations housing in an affluent area of town, where low-wage workers are critical but unable to afford to live," the architects said.

"It also contributes to much-needed housing stock in short supply in Los Angeles." 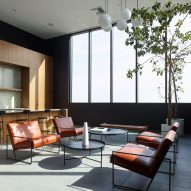 The apartments have either one or two bedrooms and range from 650 to 800 square feet (60 to 74 square metres). Strategically placed windows and exterior circulation help orient the apartments toward the courtyard, and visually connect the units to each other and the street.

The building's social spaces include the courtyard, a community room and an upper-level covered deck. There also is a below-grade parking garage and ground-level retail totalling 4,000 square feet (372 square metres).

The firm noted that 11 NOHO follows the tradition of courtyard apartment buildings in Southern California. Notable examples include the Irving Gill-designed Horatio Court, built in 1918, and the post-Second World War Ambrose Gardens, which was designed in a Spanish Colonial Revival style.

"For people living around the courtyard, the space provides a sense of safety and privacy," the architects said.

"The courtyard is a quasi-public space that mediates between the home and the street," they added. "For the city at large, the courtyard is an urbane housing type that fits well into neighbourhoods."

Brooks + Scarpa is led by Angela Brooks and Lawrence Scarpa, winners of the 2022 AIA Gold Medal. The firm has offices in Hawthorne, which is near Los Angeles, and the Florida city of Fort Lauderdale.

Other projects by the studio include a high school with aluminium facades coloured bright yellow, and The Six, a low-cost housing development for displaced veterans.

The photography is by Tara Wujcik, Jeff Durkin and Lawrence Scarpa.