Australian studio Sibling Architecture has used repurposed materials and mobile furniture to revamp Hanover House in Melbourne, allowing creatives to occupy the building before it is demolished.

The studio created a variety of spaces within the seven-storey building, which is set to be torn down to make way for STH BNK by Beulah – a 356-metre tower that is set to become Australia's tallest building.

In the two-year before demolition, developer Beulah initiated a creative programme called BETA by STH BNK and asked Melbourne-based Sibling to develop an interior design strategy to make this possible.

Sibling's approach was developed around the ambition of minimising waste. This meant reusing as much of the existing interior elements as possible and only introducing new materials if they could easily repurposed in the future.

"Over a third of waste in Australia goes to landfill, while nearly half of waste worldwide comes from construction and demolition," explained Timothy Moore, one of Sibling's four founding directors.

"So we were really in this idea of a project where there was a lot of stuff to strip out," he told Dezeen. "We saw it as an opportunity to explore the process of making in architecture."

Sibling's project extends to three storeys of Hanover House – the ground, fourth and fifth floors. Here, the architecture studio stripped back all the materials available and sorted them.

Old ceiling tiles were transformed into mobile benches, while the glazed panels of former office cubicles were rescued to divide the fourth floor into a series of designer ateliers.

Mirrored film was applied to the glass; when the lights are on you can see the ateliers inside, but when they're off the space becomes private. 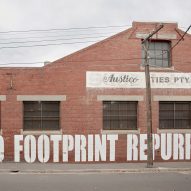 Moore said the approach is similar to that of the Zero Footprint Repurposing hub that launched at the recent Melbourne Design Week, an event that the architect is the curator of.

"We stripped back everything and kept it on site, then reused as much as we could," he said.

To support BETA by STH BNK's varied programme, Sibling also designed a series of mobile furniture elements that could be made from sheets of pre-fabricated steel.

These pieces, known as Taxonomy of Furniture, include a bar, tables, seats, planters and storage elements.

Mounted on castors, they can be easily moved around the building for different events and uses. They just as easily wheeled into the lifts and moved out ahead of the building's demolition.

"The design intent of the taxonomy was to provide a family of joinery that allow for a variety of uses, including unforeseen uses," said Moore.

In its new form, Hanover House is hosting a series of creative individuals and organisations.

The ground floor has been reimagined as a platform for innovative retail concepts. Highlights include The Future From Waste Lab, curated by designer Kit Willow, which is testing a more sustainable approach to fashion production.

The fifth floor is being used for a range of events. The first was a restaurant pop-up called Higher Order, hosted by chef Scott Pickett. Upcoming events include a holistic health experience called The Future of Wellness.

Beulah executive director Adelene Teh said the aim was to "go beyond the expected and give new meaning to the future of retail".

"The dynamic BETA By STH BNK hub of innovation and experimentation promises to ignite Melbourne, and indeed Australia's, curiosity and imagination of what has become possible," she said.

Sibling Architecture is led by Moore along with Amelia Borg, Nicholas Braun and Qianyi Lim.

Previous projects include a collaboration with Adam Nathanial Furman at the NGV Triennial, Squint/Opera's Melbourne office and the interior of Kloke's Melbourne store.

For Moore, BETA By STH BNK resonates strongly with his recent PHD thesis, which explores the topic of temporary use and "meanwhile strategies".

"I'm quite supportive of developers who are interested in interim use, because you can test out design moves," he said.

"There is a rhetoric that we have to be careful of," he added, "but it can add value, creating affordable workspace and places for people to come together."