Low-lit bathrooms informed by dressing rooms and a stage-kitchen-like restaurant feature in a members' club at iconic music venue Koko, which pays homage to its theatrical past.

The club forms part of a major expansion and renovation to the venue over the past three years that was led by Archer Humphryes Architects.

Named The House of Koko, the members' club consists of numerous bars, dining areas, lounges and a speakeasy arranged over several floors in a space alongside the public areas of the venue.

The members' club is directly connected to the refurbished 122-year-old, Grade II-listed theatre.

"The heart of the whole project is the theatre," Bengough told Dezeen.

Pirajean Lees and Bengough took cues from Koko's history as a music venue when designing the members' club interiors, which intend to playfully reflect how traditional theatres used to run.

On the first floor, The Batten's Bar is a cocktail lounge that features a central banquette with punk-era red leather trim and a ceiling canopy crafted from cloth by Richmond Design Inc that has previously only been used to make speakers.

Next to this space, there is a minimalist restaurant featuring Japandi interiors and an open-plan kitchen and dining area that was informed by the simplicity and community of old stage kitchens.

Another bar is Ellen's – an intimate 1940s-style speakeasy named after actor Ellen Terry, who opened Koko when it officially started as The Camden Theatre in 1900.

The space is defined by soft furnishings that control its acoustics and a one-of-a-kind carpet with quirky illustrations of cigarettes.

A private dining room with a geometric glass chandelier has panelled walls that hint at the main theatre located next to it, while dedicated vinyl-listening rooms with under-seat record storage give occupants the feeling of being in a vintage train carriage.

"Because we inherited such a rich history of Koko, I don't think anything contemporary or very modern would've allowed everything to carry on as if it had never closed and as if we had always been here," explained Pirajean Lees co-founder Clémence Pirajean.

Also included in the members' club is a piano room and library that are designed in the same eclectic material palette as the rest of its spaces.

There is also a penthouse with a recording studio and a lounge with numerous hidden microphones to allow artists to record music all over the room.

An airy roof terrace and restaurant lead to The House of Koko's final space, an attic-like bar hidden in the venue's famous dome, which was restored after a fire in 2020 destroyed it and extended Koko's closure. 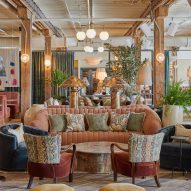 Deep olive doors informed by those that were located backstage throughout Koko in the 1920s run through the entire building and feature bespoke handles designed by Pirajean Lees.

Bathrooms with illuminated, angular mirrors intend to give visitors the feeling of getting ready for a performance backstage in a hair and make-up room.

Wooden joinery in various rooms also intends to reference the main theatre's fly tower, which is a 360-degree stage and shaft formerly used to store props and scenery that was discovered during Koko's renovation.

"The thinking was let's really go back to the past and get the past right, which sets you up to do the future in quite an interesting way," said Bengough, describing the designers' process.

"Because if you make it beautiful, and timeless, and classic and all connected, then you're like, wow, part two is as interesting and as beautiful as part one," added Pirajean Lees co-founder James Michael Lees.

As well as the members' club, Pirajean Lees and Bengough also designed the interiors for two public spaces at the music venue.

These are Cafe Koko, a pizzeria featuring a bar that doubles as a small stage for live performances and a shop selling Koko merchandise.

Koko will officially reopen to the public on 30 April, with live streaming capabilities installed throughout the venue so that artists can reach audiences all over the world.

Previously, Pirajean Lees also created the interiors for a jazz-age-style restaurant in a converted Dubai nightclub.

The photography is by Lesley Lau.