The apartment block, called The Building Descending the Stairs, is elevated on angular metal stilts above a piazza and swimming pool.

Providing 47 apartments above a podium of new commercial space, the project sits just 150 metres from the coast on a site in Jesolo's tourist centre. It was designed by ElasticoFarm, which has offices in Italy and Canada, together with local practice Bplan Studio.

Driven by the desire to frame sea views for residents while not blocking those of its neighbours, the practices created the block's distinctive arc shape, maximising exposure to the sun and surrounding a new public space below.

Facing south towards the sea, the inside of the crescent features a series of stepped terraces and balconies, clad in small white mosaic tiles, that provide each apartment with private external space.

On the northern side facing the city, a series of colourful walkways provide access along and between floors, alongside a separate volume containing lifts.

The blue mesh of these balustrades is informed by the fishing nets used in the nearby Venetian Lagoon, while the bright orange entrance blocks to the apartments are designed to look like buoys.

"The suspended building takes the form of an arc and organises the apartments so that, moving back upwards, they are enriched with large terraces and open views towards the sea," said ElasticoFarm.

"In doing so, each unit makes the most of its position," it continued. 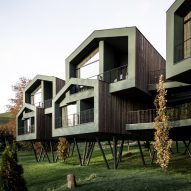 To maximise usable space, the residential block was elevated above the new commercial spaces below, creating a sheltered podium level atop a concrete base housing a supermarket.

Concrete steps lead up onto this podium, where a solarium and swimming pool sit alongside a landscaped area, with green concrete planters arranged at the bases of the block's metal supports.

"The roof of the commercial space became a new artificial territory and a stilt structure, capable of supporting the eight residential floors rising above it," said the practice.

"The new apartments can therefore enjoy an open and partially covered area for amenities, while also being raised above the street noise," it continued. 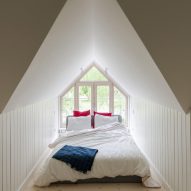 In South Tyrol, Italian studio Network of Architecture recently completed an extension to a hotel comprising a cluster of "treehouse" guest suites raised on stilts to preserve the landscape.

In Palanga, Šilta Šiauré built a block of four holiday apartments that were clad in charred timber.