With just over one month to go until Dezeen Awards entries close, last year's winners explain how the victory positively impacted their studios and why others should enter.

One studio said that winning a Dezeen Award "carries great professional credibility," while another studio said entering was an "excellent opportunity to gain international publicity."

"Winning has certainly improved our name recognition, helping us to attract new clients and, very importantly, new talent for our team," said a studio that won civic and cultural interior of the year.

Dezeen Awards 2022 is open for entries until 1 June! Enter now to see how receiving a Dezeen Award could change things for you and your business.

This year, there are 33 project categories and six studio categories. There are also three sustainability categories and five media categories, which will reward the best photography, video, visualisations and websites.

Here is what last year's winners had to say:

"It was a breadth of optimism"

Ghotmeh described winning as a "breath of optimism" for the Beirut architecture and design community.

"We had beautiful reactions from our community who were sharing their joy to see the project awarded," she said. "It was a breadth of optimism in a city suffering very much economically, socially and politically."

"Dezeen is one of the exceptional platforms for talking to a wide range of professions which is very precious for the development of the architecture profession," she added. 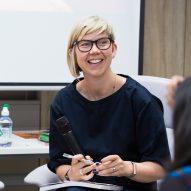 "Dezeen's reach has put my work in front of a much wider audience and helped to attract clients at a global level," said Samuel Day, whose project was named website of the year and also won the public vote.

"The team was just me - so I can assure you that I was ecstatic to win both the public and jury vote for website of the year," explained Day. "It took months to make and I almost gave up multiple times so to receive this level of recognition when it was finished was a real honour."

"I would encourage other web designers and web design studios to enter the Dezeen Awards," he added.

"The web industry is a bubble. Winning an award from Dezeen allows you to get your work seen outside of the normal platforms and puts it in front of a different and much wider audience due to the reach of the platform."

"Dezeen has established its high credibility and rigorous international reputation in architecture, interior, and other design fields over the years," said Lyndon Neri and Rossana Hu from Chinese studio Neri&Hu, which won architecture studio of the year and small interior of the year at Dezeen Awards 2021.

"We know Dezeen not only reaches a wide range of audience with its authoritative influence, meaning, many who may not know what we do will gain a new understanding of our work, but also the awards provide a certain peer review for us to gauge how other professionals see our work."

"We also value how the Dezeen judges think as they present a distinguished community of design professionals and thinkers," they added.

"It is a great way to critically examine one's own practice"

"We wanted to see where our practice stands on a global platform and the Dezeen Awards were a good way to find out," said Dushyant Bansal, co-founder of Studio Raw Material.

Indian-based Studio Raw Material, co-founded by Bansal and Priyanka Sharma, was crowned emerging design studio of the year in 2021.

"We did get a lot of new enquiries, many for larger projects," he said. "Also people setting up new galleries wanted us to be part of their selection of the designers they intend to present in their space."

"We could see the regional impact in terms of our Instagram followers," he continued. "It also got us a wider audience internationally."

"Apart from the obvious results of gaining a wider audience and the thrill of a win, it is a great way to critically examine one's own practice," he added. "It facilitates the opportunity to take a pause and analyse all your work and observe its evolution over time."

"For us, Dezeen is one of the most known and respected platforms for design and therefore it was a natural decision," said Louekari.

"We have been gaining more coverage"

Fyra was awarded large retail interior of the year and interior design studio of the year in last year's programme.

"Our team was absolutely thrilled about the awards, especially the interior design studio of the year award which recognised our work as a team," said Louekari.

"To be recognised at such a high level ensured us that trusting your vision during the design process pays back."

"The biggest impact for us has been the one on a global level," she continued. "We have been gaining more coverage in the international press and also gained international inquiries."

"Our social media interest has also increased significantly after the coverage on Dezeen."

Dezeen Awards is accepting entries until 1 June. Find out more about how to enter here.