Dutch artist Thijs Biersteker has developed a machine that shows the emissions associated with everyday online activities from video chats and emails to trading NFTs as visible puffs of CO2.

The MB>CO2 installation consists of three monitors, each showing a different computer window from a Zoom call to a Spotify playlist.

These are hooked up to a mini-computer that uses an algorithm to calculate the emissions associated with each action in real-time and triggers the release of the corresponding amount of carbon dioxide gas into a spherical terrarium.

As the concentration of carbon dioxide in the miniature biotope rises, the plants begin to wilt and provide a visual metaphor for the impact that our internet use has on the planet at large.

"Sometimes making complex problems smaller and relatable helps us understand the bigger picture again," Biersteker said. "The further we get removed from seeing the impact we make, the closer we get to the point that we stop caring."

The internet's carbon footprint is largely down to the energy needed to power the network, the laptops and phones we use to access it, and the data centres and servers that house all of its contents.

Together, this accounts for 3.7 per cent of global emissions, which is equivalent to all of the world's air traffic.

According to Biersteker, efforts to slash this carbon footprint are being held back as it is hard for people to visualise or calculate the impact of our everyday online actions.

That's because internet infrastructure like data centres is generally hidden out of sight and online service providers don't release data on the emissions associated with using their platforms.

"There is an enormous lack of transparency in this field by design," Biersteker told Dezeen.

The MB>CO2 installation looks first and foremost at the impact of video calls and incorporates an interactive element by allowing viewers to "dial in" to the installation.

These video chat windows are then displayed on one of the monitors, while the algorithm estimates the emissions that are generated by each call per minute and triggers the release of CO2 into the terrarium for as long as the call continues.

"The live calculation is a simple algorithm that calculates location, hubs and emissions based on the energy mix in the location of the servers," Biersteker said.

"For example in Germany, there is way more polluting brown energy mix reliant on coal than in the Netherlands."

MB>CO2 also shows the impact of other online activities such as trading a non-fungible token (NFT), sending an email attachment or watching an hour of Netflix based on an average of the best available data.

Biersteker has tried to limit the environmental impact of the installation by constructing it from 95 per cent recycled steel, as well as screens and a LattePanda Alpha single-board computer (SBC) with low energy consumption.

However, MB>CO2 still relies on the use of the internet as well as industrial-grade CO2, which is taken from the same gas cylinders used to fill soda makers. 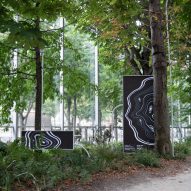 Biersteker is currently only running the machine for around half an hour each month, as overfilling the terrarium would kill the plants and release the excess carbon dioxide into the atmosphere once the biotope is opened.

Limiting its usage keeps the plants alive so they can keep turning the CO2 into oxygen through photosynthesis.

"But we've tailored the time span, during which the machine is turned on, based on the CO2 levels in the biotope. Hitting above 1,100 parts per million makes the leaves of the plants get all shrivelled up, so we turn it off."

Rather than shipping the installation around the world, Biersteker is currently set to keep MB>CO2 in his studio in the Netherlands, with museums, galleries and individuals able to book a timeslot to call into the work or live stream it to an audience.

"I want to try a new hybrid model to reduce shipping and install emissions and keep control over the operating times," he said.

"We've opened it up to curators and friends for now," Biersteker added. "We are fully booked for the next sessions and have a growing waitlist, including people from UNESCO, the usual art crowd and NFT-loving crypto bros."

"It's so funny, some of the NFT platforms are even asking if we would produce an NFT of this work."

NFTs were catapulted into popular awareness last year after a flurry of high-profile sales were made using the blockchain technology, including a collage by American artist Beeple that became the most expensive digital image ever.

But a number of creators including architect Chris Precht cancelled upcoming releases after discovering the outsized emissions associated with minting and selling NFT artworks.

These can be drastically reduced by switching to more energy-efficient blockchains such as Tezos or offsetting their footprint using certified carbon removal schemes, as pioneered by musician Imogen Heap.

The photography is courtesy of Thijs Biersteker.