Construction has begun on Park Habitat, a plant-covered building in Silicon Valley that was designed by Japanese studio Kengo Kuma and Associates with a green atrium at its centre.

The 20-storey building will have a glass and wood facade covered with vines and planters and will be located in downtown San Jose in the middle of Silicon Valley, California.

The mixed-use 1.3 million-square-feet (120,774-square-metre) structure, which broke ground on Earth Day, will also have a "green-lung" atrium at its core.

"Strong relationships to nature are essential to our quality of life," said Kengo Kuma, founder of Kengo Kuma and Associates. "Park Habitat breathes with an outsized vertical courtyard called the green lung."

"The green lung brings light deep into each floor and surprises as a vertical garden, pervading the building’s atmospheres," he added.

Other aspects of the building that will contribute to its biophilic design include a landscaped garden on the roof and operable vents on the exterior that will bring in and flush out air.

This will create "architectural inhalation and exhalation on a 24-hour cycle," the studio said.

"The biophilic stance of the building is systemic and performative, not just metaphorical," Kuma said.

Setbacks housing tree-filled garden spaces will be carved out of the facade to open up the exterior of the building to the atrium and reveal concrete structural beams.

Concrete beams will lift the building at the base, creating what Kuma describes as a "covered porch" for the city that connects Park Avenue to the adjacent Paseo.

This "porch" will be heavily landscaped. Decorated slats that mirror the wooden louvres on the facade of the buildings will be hung over the pedestrian areas and also feature in the semi-enclosed setback gardens.

Park Habitat will house retail and office spaces, as well as a museum, and function as an "expansion space" for the adjacent Tech Interactive, a science and technology centre that offers educational programming.

The building is part of Net Zero Campus, an initiative by the city together with developers Westbank, Urban Community, Peterson and OPTrust that will eventually comprise six buildings on the San Jose campus. 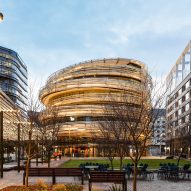 "To reduce embodied and operational carbon to the greatest extent possible, the project will leverage low-carbon building materials, and connect to an all-electric district energy system developed by Creative Energy," Westbank said of Park Habitat.

The Net Zero Campus initiative seeks to "create a sustainable community for the creative economy that brings companies and their teams out of suburban industrial parks and re-connects them with the urban environment," the developer added.

Kengo Kuma and Associates designed the stadium for the 2020 Tokyo Olympics and its other upcoming projects in North America include a holiday home designed for Kim Kardashian.

Images are by Kengo Kuma and Associates, courtesy of Westbank, unless otherwise stated.