Bathing Culture at the Museum of Design and Applied Art in Reykjavík tells the history of geothermal pools in Iceland as part of DesignMarch. Here are five that demonstrate how the culture has changed over the past century.

Opened during this year's coronavirus-delayed DesignMarch festival, the Bathing Culture exhibition, which continues until 25 September, aims to highlight the country's unique culture of bathing in its numerous geothermal pools.

"In Iceland the pool is a place where strangers cross paths and acquaintances meet, it serves a purpose similar to the plaza in a warmer climate, the pub in England or the cafe in France," explained Sigridur Sigurjonsdottir, director of the Museum of Design and Applied Art.

"For us it is a source of wellbeing and part of everyday life."

Curated by product designer Brynhildur Pálsdóttir and Iceland University ethnology professor Valdimar T Hafstein, the exhibition charts the changing relationship between Icelandic people and its pools that are fed by naturally heated water.

It is split into three sections that document the different eras of bathing culture, starting with Learn, which is focused on early 20th-century public pools that were designed to encourage people to swim. 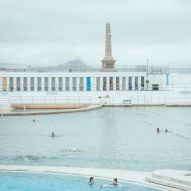 These were followed in the late 20th-century by pools designed with hot tubs and slides that are covered in the Play section, and finally, the relatively recent emergence of spa-like pools is the focus of the Enjoy part of the exhibition.

"Bathing Culture traces the development of public pools in Iceland from the beginning of the 20th century when the focus was on learning, hygiene and physical education, to the 1960s when playing became a key element, and finally to the present when pleasure is the ultimate goal of a spa-like experience," explained Sigurjonsdottir.

Read on for five pools that chart the history of geothermal bathing in Iceland:

Sundhöllin, which translates as swimming palace, opened in 1937 and is one of the oldest public pools in the country.

Designed by city architect architect Einar Sveinsson in the 1960s, and later explanded by Bjarni Konráðsson and Jes Einar Þorsteinsson, this complex in the Laugardalur district of Reykjavík has an Olympic-sized 50 metre pool connected to a 400-square-metre "fun pool".

Typical of the era, it has a large water slide and numerous hot tubes of different sizes and temperatures. The photograph shows children queuing for the slide in 1988.

The Árbæjarlaug swimming pool in Reykjavik again combines space for play and exercise. A dome covers the entrance and an indoor pool that is connected to the outdoor pool for playing.

A series of slides, hot tubs and a 25-metre pool are arranged around it.

Set alongside the Svartsengi geothermal power station, the Blue Lagoon is Iceland's best known geothermal spa. Opened in 1987, it is the first pool within a lagoon created from the power plant's waste water.

This lagoon was later removed and in 1999 the current modern-day spa faculty opened with the Retreat at Blue Lagoon hotel (pictured) added to the complex in 2018.

Set on the beach in the small town of Akranes, the Guðlaug Baths is a two-level hot tub topped with a viewing platform.

Water flows from the oval-shaped hot geothermal pool on the middle level to the cooler pool at the bottom.

DesignMarch takes place from 4-8 May 2022 in Reykjavík, Iceland. See Dezeen Events Guide for an up-to-date list of architecture and design events taking place around the world.