In this exclusive video produced by Dezeen, artist collective Drift talks about its recent drone installation above the Elbphilharmonie concert hall in Hamburg.

Called Breaking Waves, the kinetic installation employed a fleet of 300 illuminated drones programmed to move in a wave-like pattern around the Herzog & de Meuron-designed building.

"New tech comes very close to magic," Nauta said. "That's when you can engage an audience, you can open up their mind and plant an idea."

"It's not so much about the technology you work with – it's about what you do with it," Gordijn added.

Created to celebrate the fifth anniversary of the Elbphilharmonie's opening in Hamburg, the piece references the signature form of the building and its location on the Elbe river.

"We looked at the relationship of the building and its location and we took that as inspiration to create this performance, emphasising the movements and frequencies in this sculptural, architectural building," Nauta stated.

"We are using drones to complement the building, to play with it, to discover it and celebrate what this building means for the city," Gordijn said.

The piece was set to the second movement of Thomas Adès's Concerto for Piano and Orchestra, which was performed by the NDR Elbphilharmonie Orchestra and recorded at the Elbphilharmonie in January of this year.

By carefully choreographing the music and movement, the artists aimed to bring the audience members together "on the same frequency".

"Everything suddenly becomes much more easy when you're all breathing, living and being at the same frequency, in the same moment." 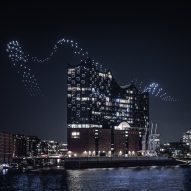 The seven-minute piece was intended to be performed in the evening over the course of four days, but was cut short due to security reasons after "aggressive disruption" by unidentified drones.

The performance coincided with a wider programme of cultural events planned to celebrate the Elbphilharmonie and Hamburg’s cultural scene, including the opening of the Hamburg International Music Festival.

"Thanks to the Elbphilharmonie with its inspiring architecture and its varied, high-quality programme, Hamburg's image as a city of art and culture has become much more pronounced both nationally and internationally," said Hamburg's minister for culture and media Carsten Brosda.

Since its opening in 2017, the Elbphilharmonie has attracted 14.5 million visitors and has tripled the number of concertgoers in Hamburg, as well as boosting the number of visitors to the city’s other museums, galleries and theatres, according to Hamburg Marketing.

The structure is built on top of a traditional red-bricked storage warehouse from the 1960s.

Drift previously staged performances using illuminated drones including its Franchise Freedom installation, but this is the collective's first drone installation that interacts with a building.

The duo also recently created a drone installation at the 2021 Burning Man festival.