The scheme, which is the first housing project realised by the Canadian-American architect in the UK, contains two buildings with a total of over 300 homes.

Gehry designed Prospect Place with his eponymous studio Gehry Partners as part of the regeneration of the iconic Giles Gilbert Scott-designed Battersea Power Station on the banks of the River Thames.

Alongside the residences, it also comprises a mix of retail units and a private garden named Prospect Park.

According to Gehry, the goal for the development was for it to read independently while also framing and connecting to Battersea Power Station.

"I love London," reflected Gehry. "It has culture, history and diversity and the buildings we have created at Battersea Power Station are designed to stand artfully on their own amongst all of that, whilst also framing an internationally recognised icon."

"It is important we create social places for future generations and our goal from the start has been to create a neighbourhood that connects into the historic fabric of the city of London but also has its own identity and integrity," added Gehry.

The opening of Prospect Place comes ahead of the opening of the revamped power station by WilkinsonEyre, which is expected to finish in September and will include a glass lift within one of its chimneys.

Within the two buildings are a total of 308 homes that vary in size, ranging from studio apartments and one-bed flats to four-bedroom townhouses and penthouses.

Gehry Partners' design of each apartment also differs, meaning that no two homes are the same. However, each one has an open-plan layout, access to either a winter garden or terrace, and views over the city.

Externally the two buildings are distinguished by their sculptural white facades, which have a rippled effect and are punctuated by large windows.

This creates a contrast with the uniform and industrial architecture of the adjacent power station, clearly distinguishing between old and new.

Inside, the apartments have been finished using two palettes named London and LA, developed by Gehry Partners.

The London palette is made up of metallic finishes and rich in textures that are intended to offer an industrial look, while the LA version makes use of pale wooden finishes and a light colour scheme.

At street level, the two buildings are complete with double-height retail units. These link to a pedestrian walkway through the development, which will eventually lead to a new high street for the wider area named Electric Boulevard.

Positioned between the two buildings is the Prospect Park, which was designed for residents by LDA Design – the designers behind the landscaping at Queen Elizabeth Olympic Park. 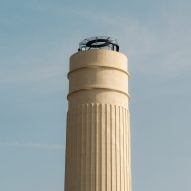 The completion of Prospect Place marks a significant milestone in the long-awaited regeneration of the Grade II*-listed Battersea Power Station.

It is positioned to the south of the former station, alongside a neighbouring building by British studio Foster + Partners named Battersea Roof Gardens.

The rooftop gardens will be developed by garden designer LDA Design but in collaboration with landscape architect James Corner, who created the New York High Line.

Earlier this year, the lead architect on the restoration project WilkinsonEyre revealed images of its Battersea Power Station Chimney Lift.

The attraction will rise through the power station's northwest chimney and offer visitors 360-degree views of London 109 metres above the ground.

The photography is by Taran Wilkhu unless stated otherwise.