Architecture for London has used a palette of stone, concrete and wood to create this monolithic rear extension to a house in Islington, which features a small arched entrance for the owner's cat.

Aptly named Stone House, the extension was designed by Clerkenwell-based studio Architecture for London for a family who wanted to expand the living spaces of their Grade II listed home while retaining its existing character.

"The clients considered themselves custodians of the building, with the responsibility of restoring the dilapidated interior and structure," architect Alastair Selven told Dezeen.

"The lower-ground-floor interior was dark and cellular with a poor outlook onto the garden so the clients wanted to open up this space to provide a new core for family life."

Architecture for London designed the rear extension as a stone pavilion that houses an informal dining room connected to a terrace, along with a flexible space used primarily as a yoga room.

The building's heritage listing meant that original openings on the lower ground floor had to be retained in order to receive planning permission for the new addition.

A sash window on the original rear elevation now divides the kitchen and extension. This prompted the architects to develop the new addition as a space between indoors and outdoors, built predominantly from stone.

The main structure of the Stone House extension is constructed using locally sourced limestone, chosen for its low embodied energy.

"We wanted the extension to have a sense of permanence while appearing clearly distinct from the historic fabric of the original building," Selven said.

"The rhythm of the facade follows the fenestration pattern of the original building, providing long views from the interior."

An oversized concrete header creates a monolithic structural element above the opening to the extension. Its honed surface reveals pieces of limestone aggregate quarried in Derbyshire.

Oak-framed windows set into the elevation create a strong connection with the outdoor spaces. A 1.8-metre-wide pivot door can be opened to allow activity in the dining area to spill out onto the terrace.

Stone House's rear terrace, which was previously a lightwell, was extended to create a generous sunken space for socialising. Curved benches wrap the perimeter and are positioned to follow the sun's path throughout the day.

Both the tiered terrace and low plinth of the extension are built from an agglomerate stone made from recycled waste from a quarry in Lombardy, Italy. 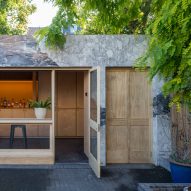 As the plinth transitions from outside to inside, its surface changes from bush-hammered to a smooth finish. Arched openings on either side of the elevation create a passageway for a cat.

Internally, a limestone wall separates the dining room from the smaller wood-panelled yoga space. This space is topped with a skylight inspired by artist James Turrell's skyscape installations.

Existing spaces on the lower ground floor were opened up to create a large kitchen centred around a four-metre-long island.

As part of the project, Architecture for London also updated the rest of the Stone House with a palette of mostly natural materials including timber joinery and stone surfaces.

The bathrooms combine limestone, concrete and dark natural plaster that complement the extension.

Architecture for London was founded in 2009 by architect Ben Ridley.

The studio's previous work in the British capital includes the renovation of Ridley's own energy-saving home as well as a light-filled London extension featuring reflective stainless steel and polished concrete surfaces.

The photography is by Building Narratives.