British architect and illustrator Anna Gibb has combined buildings by architects including Le Corbusier and Mies Van der Rohe to create an architectural montage of places people would like to be quarantined in during the coronavirus pandemic.

London-based Gibb made the pen drawing on watercolour paper over the past month while in lockdown by combining suggestions of architecturally significant public buildings into one architecture rich collage.

"I wanted to make a collaborative piece as an escape from the groundhog days we find ourselves in," Gibb told Dezeen. "We're all physically separate at the moment, but connected in ways that mean a project like this was possible, and indeed exciting."

Each of the buildings was selected by Gibb's friends, family and social media followers, with the first building – Torre Guinigi in Lucca – chosen by Gibb herself and the final building – Grimshaw's Eden project – chosen by her husband.

"The only 'rule' for suggesting a building for the drawing was that it is normally open to the public," explained Gibb.

"So there are museums, galleries, castles, even a lighthouse. There are lots of architectural gems in there but it was good fun to discover a few buildings which were completely unknown to me before this, such as the beautiful Jantar Mantar in Jaipur, the world’s largest sundial."

The montage includes 51 buildings across 14 countries spanning 438 BC to 2017, as well as the International Space Station. The buildings represent a broad spectrum of styles with modernist icons like Farnsworth House by Mies Van der Rohe and Ronchamp by Le Corbusier alongside the high-tech Lloyd's building and baroque Castle Howard.

"There are a real mix of styles, which I think really adds to the visual interest of the piece," said Gibb. "I love the juxtapositions it has created, such as the Parthenon in conversation with the Oslo opera house."

The drawing also includes several buildings built in the 21st century like the Oslo opera house by Snøhetta and 20 Fenchurch Street in London by Rafael Viñoly. Jean Nouvel's Louvre Gallery in Abu Dhabi is the newest building in the drawing.

At the other end, the oldest building in the picture is the Parthenon in Athens, with the Roman baths in Bath and the Pantheon being the other classic buildings in the composition. 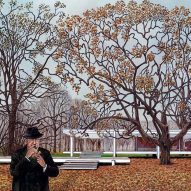 Gibb's began the drawing five days after lockdown in the UK began and enjoyed the collaborative nature of the design process.

"Drawing for me is usually very much a solo pursuit so this was completely new to me. Normally, once I receive, or create, a brief, I spend a long time researching and constructing the drawing in my head," she said.

"It was refreshing to have this first part of the process removed thanks to all the brilliant suggestions from the participants, so I could just jump straight into drawing."

A print of the final drawing is for sale at online shop Urbanmakers, with all of the proceeds set to be donated to charity.

"All profits from the sale of the prints will be donated to Macmillan Cancer Support," said Gibb. "It is a cause close to my own heart and they are suffering from a significant reduction in funding since the onset of this pandemic.

"Notwithstanding that fact that there's an inherent increase in demand for their unbelievable services in this uncertain time. I'd also like to mention the hosts of my online shop, Urbanmakers, who've waived all commission from print sales in order that we can donate more to Macmillan."

Across the world millions of people are currently self isolating in their homes to slow the spread of coronavirus. For those looking for architectural entertainment Dezeen has rounded up ten films with amazing architecture, while for this with children Foster + Partners has created a series of architecture activities.