Up next in our deconstructivism series is Frank Gehry's Guggenheim Museum Bilbao, a building that reignited the city's economy and started a global trend for landmark museums.

Situated on the west bank of the River Nervion, which flows through Bilbao before reaching the Cantabrian Sea, the Guggenheim Museum instantly attracted attention and critical praise upon its completion in 1997.

When the legendary American architect Philip Johnson visited the Guggenheim shortly after it opened, he described Gehry as "the greatest architect we have today" and later called the museum "the greatest building of our time".

Although Gehry does not himself identify as a deconstructivist architect, the Guggenheim Museum became emblematic of the movement due its distinctive appearance comprising a fragmented arrangement of non-rectilinear volumes.

Viewed from the river, the museum resembles a ship at dock, while its shimmering titanium skin evokes the scales of a writhing fish.

At the time, the building's complex and daring architecture was unusual for a large-scale, publicly funded cultural institution.

From the outset, however, the museum was intended to form the centrepiece of a larger economic development project.

The Basque government had already engaged architects including Norman Foster and Santiago Calatrava to undertake major infrastructure projects as part of its plan to transform the industrial city into a destination for cultural tourism.

Canadian-born Gehry was predominantly known for expressive works in his adopted home city of Los Angeles when he won a competition organised in 1992 by The Solomon R Guggenheim Foundation to design a museum for a site in a dilapidated port area.

The Guggenheim Foundation's director, Thomas Krens, recognised that such a project required a landmark building and cited the Sydney Opera House as an example when describing the impact it could have on the city.

"We are defining ourselves in terms of strengths, and architecture is one of our strengths," he claimed.

"He [Gehry] was chosen for the strength of his vision," said Krens, who also claimed in a television interview that the building "is going to be precedent-setting for what museums of the 21st century can be."

Gehry has claimed that the design for the Guggenheim Museum Bilbao was the culmination of a personal design language he developed in reaction to the prevalence of postmodernism in architecture at the time.

He rejected postmodernism and the way it created a pastiche of past architectural styles, claiming that he preferred to look back 300 million years to forms that predate mankind. In particular, he was fascinated by fish.

"I was interested in movement and when a fish moves it's so beautiful," he said in a 1997 interview with television journalist Charlie Rose, "I started to make forms like that and was able to achieve that sense of movement and I developed an architectural vocabulary."

The dynamic forms that define the exterior of the Guggenheim Museum Bilbao were achievable thanks to computer modelling software developed by French aerospace company Dassault Aviation.

Using 3D design software called CATIA, the architect's office was able to visualise surfaces with multiple compound curves and, most importantly, demonstrate to contractors how these expressive forms could be built.

Gehry has proudly recounted many times how the building was completed on time and on budget (approximately $89 million).

He puts this feat down to the ability of the computer software to accurately model all the necessary components, and to a close collaboration with the various building trades during construction.

The museum is located on the edge of the city centre in what had become a rundown docklands area. Its design responds to the urban setting, as well as to the arch of the river to the north and the Salve Bridge to the east.

The ship-like profile visible from the river recalls the area's industrial heritage, while from above the building's plan resembles a flower, with petals spreading out around a central atrium.

The museum's galvanised steel framework is clad externally in limestone and glass, along with 33,000 paper-thin titanium panels, chosen for the way the metal reflects the natural light.

Visitors enter the building through the atrium, which features large, glass curtain walls that connect the inside and outside. The light-filled space contains curved walkways, glass elevators and staircases connecting the three internal levels.

Exhibition spaces totalling 11,000 square metres are provided across the museum's 19 galleries. Ten of the rooms feature a standard orthogonal plan, while the others vary in shape, with several designed to house permanent works.

The Guggenheim Museum Bilbao's socio-economic impact more than met its objective of transforming the city's image, with calculations in 2017 suggesting that the museum generates around €400 million per year for the local economy. 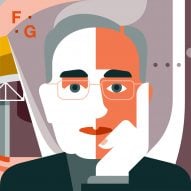 In subsequent years, cities around the world sought to replicate the Guggenheim's success by commissioning high-profile cultural buildings, in a trend that was dubbed "the Bilbao effect".

In an interview with Dezeen in 2021, Gehry said he doesn't care about the global copycats or the trend his building started, although he accepted that the project did alter the city's economy and social dynamics.

"People are always telling me how I changed the city," said Gehry. "I didn't mean to change the city, I just meant to be part of the city."

Guggenheim Museum Bilbao has its detractors, some of whom claim it is too dominant and that some of its spaces aren't well suited to displaying art. The "Bilbao effect" also resulted in numerous projects in other locations that failed to deliver similar benefits for the local community in relation to the amount of money invested.

The Pulitzer Prize-winning critic Paul Goldberger, however, called the project "a signal moment in the architectural culture," adding that: "The building blazed new trails and became an extraordinary phenomenon."

In a 2010 poll conducted by Vanity Fair magazine, the Guggenheim Museum in Bilbao was named "the most important piece of architecture built since 1980".

Gehry would go on to receive widespread recognition and acclaim for projects including the Walt Disney Concert Hall in Los Angeles, the New York by Gehry residential tower in Manhattan, and the Fondation Louis Vuitton in Paris.

The architect's firm is also behind the design of the Guggenheim Abu Dhabi, which was first unveiled in 2006 and is finally slated to open in 2025.

The photography is courtesy of Guggenheim Museum Bilbao.